Europe conference: Change at the heart of the supply chain 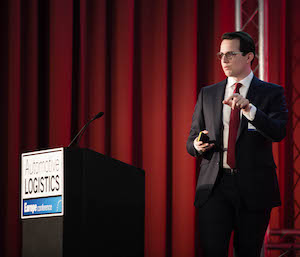 New technology and consumer trends are changing what a car does and how it is used but they are also changing the commercial transport and logistics providers supporting the delivery of those cars. Electric and autonomous vehicles, digital connectivity, and smart mobility are all accelerating change in the supply chain.

Taking autonomous vehicles as an example, up to 15% of all new vehicles sold in 2030 could be fully autonomous, according to Matthias Kässer, industry analyst at McKinsey & Company (pictured). But there will be a quicker uptake in the use of automated technology in the logistics field. It is something that is already underway with the increasing use of automatic guided vehicles (AGVs) and drones for parts handling in vehicle plants and logistics facilities. Andreas Ginkel, director of logistics at Adam Opel, pointed to the efficiency gains to be had from using connected AGVs for the line feed of parts, whereby the assembly station automatically summons the parts according to just-in-time demand.

Enthusiasm for this sort of game-changing technology was shared by Ginkel’s colleague Michael Gorny, manager of vehicle planning for Opel/Vauxhall. He said the automotive industry will be going through some exciting changes in the next 5-10 years. “HMI (human-machine interface) is increasing,” he said “Our cars are not only providing good data but they communicate it better. There is also real-time connectivity in the value chain networks.”

In terms of the outbound supply chains, RFID technology, which is well established, has already brought significant change, according to Gorny. He cited the problems associated with the manual booking of vehicle movements when cars are handled at Opel's assembly plant compounds. Opel now automatically captures vehicle movement with RFID on a compound management system. “We had to manually scan vehicles entering the yard,” said Gorny. “Now, using an RFID tag which is attached at the end of the production line, it can be measured at all stages.”

As well as the elimination of manual scanning, the benefits include improved yard utilisation, visibility and dwell time, and identification of loading order for truck and rail, supporting vehicle inventory control.

Standardise telematicsTelematics is to some extent usurping RFID and is something with huge potential in the automotive logistics sector, according to Deborah Buswell, European distribution manager at Jaguar Land Rover. However, challenges remain in making the most of it.

“I think some of the challenges we have are that technically we are not compatible and different service providers and OEMs are disjointed,” she said. She added that the industry needed to find a way of standardising information, making it available to all.

“Telematics will assist in illuminating the way and accelerating the processes. It will eliminate manual intervention,” she said “It is in its infancy but I think it can assist, and the more available we make it, and the more standardised we make the transfer of knowledge and data, the better.”

New industry structures OEMs compete with each other on the back of a robust value chain, but the market is going to become more complex and involve consumer electronics and software providers in the same field as OEMs and tier suppliers. Those new digital players will bring new industry structures, and for logistics, it means embracing concepts behind services such as Ubercargo, car2go cargo and Instacart. The delivery tracking used by Amazon is now regularly talked about as a concept that needs to be embraced by logistics providers in the automotive industry. When this happens, competition will become scattered, according to Kässer, and will include lower tier providers, mobility providers and technology giants.

The take up of new technology in the automotive industry has been directly influenced by one such technological giant – Google. “There was a big push when the industry recognised that Google was looking at automotive,” said Kässer.

However, that industry is going to have to change the way it works and move out of its traditional seven-year cycle into half-yearly cycles of change. That is going to be a difficult switch, according to Kässer. The new entrants are more focused on their product portfolio and activities along the value chain, increasing the competitive pressure on established OEMs.