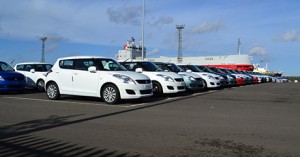 [Updated July 5th] The UK government is dithering in the political direction it will take following last week’s controversial vote to leave the European Union. That dithering is doing nothing to alleviate the uncertainty that has spread across the country’s automotive sector, from the OEMs and suppliers to the transport and logistics providers.

As reported last week, while a number of carmakers including BMW and Jaguar Land Rover have reaffirmed their commitment to the UK sector, others have suggested they would review their current approach to business in the UK. Japanese carmakers including Nissan, Toyota and Honda, in particular, have been cautious in their responses to the situation. Toyota stated that it would be analysing the impact of a withdrawal from the EU on its competitiveness and growth in the country. An anonymous source at Nissan told business analyst IHS Automotive that it had no choice “but to be more cautious with [its] investment decisions, including moves like whether to produce a new or significantly redesigned vehicle model in the UK”.

GM’s Vauxhall division said it was important that business continued to benefit from the free movement of goods and people and that it fully supported the UK remaining part of the European Economic Area. Comments this week from outgoing prime minister David Cameron urging the EU to curb the free movement of people seem to partly disappoint this appeal.

Success based on access to EU The Society of Motor Manufacturers and Traders (SMMT) has urged the UK government to keep the country “open for business”, citing figures from its most recent sustainability report that show a record £71.6 billion in automotive manufacturing turnover last year, up 7.3% on 2014. That performance was matched by a growth in employment, with 814,000 people across the UK working in the sector.

“This success has been due to unrestricted access to the single market, input to EU legislation to safeguard the interests of UK automotive, and the ability to recruit talent from abroad,” said Mike Hawes, CEO of the SMMT. “Our growth depends on certainty and continued open and reciprocal access to the 100-plus markets with which the UK automotive industry so successfully trades. This is not just finished cars but components, technologies and the wider automotive value chain. Any risks and uncertainty [about] these fundamental benefits need to be addressed head-on by the UK government.”

However, that uncertainty is not being met head-on and has instead spread to all parts of the sector, including transport and logistics providers, who are being reserved in their response to the crisis. Until the implications of the vote and the country’s next steps become clearer, the main conviction is ‘business as usual’. However, this situation is anything but 'usual'.

Ceva Logistics said it did not expect a negative impact on its business despite Britain voting to leave the EU and that it would continue to offer tailored services to and from the UK and mainland Europe, adding that it would “use the transition time to adopt to any changes to the operating environment”.

Meanwhile, Gefco said that Britain's vote to leave the European Union would undoubtedly bring some uncertainty as businesses navigate the new landscape. "Gefco UK will be monitoring the events closely for any potential impact," it said in a statement. "In the meantime Gefco UK will continue working closely with its clients to support them in the coming days and as the longer term implications of this vote becomes clearer."

Rival logistics provider Kuehne + Nagel was also cautious in its response. "In our view it is too early to comment on the impact on the logistics business and we do not want to start speculations on trade procedures after Brexit," a spokesperson told Automotive Logistics. "Generally we can state that Kuehne + Nagel is able to quickly adapt to changing conditions due to its flexible structures and processes and is experienced to handle complexity for the benefit of its customers." The spokesperson added that situation would not affect its planned reorganisation of business structure in Europe, which was recently announced.

Port operators around the UK have also been somewhat impassive in their reactions, where they have expressed them. Associated British Ports (ABP) said it was too early to judge exactly what the implications of the vote might be but that it anticipated new opportunities and challenges.

“ABP will work hard to seize those opportunities and address those challenges,” the company said in statement. “For the time being, it is business as usual at ABP and we will continue to fulfill our mission to keep Britain trading.”

Bad for economy According to IHS Automotive, the vote to leave the EU is bad news for the UK economy and that heightened uncertainty will affect business and consumer activity. It said that while the sharp fall of sterling following the vote (down to a 30-year low against the dollar) should help UK exports, it would also push up inflation. That would raise company input costs and squeeze consumer purchasing levels.

“Furthermore, the UK’s decision to leave the EU will undoubtedly dampen European growth, which will hamper UK exports despite a weaker pound,” said the analyst in a statement. The consequences for the automotive sector are a reduction in light vehicle sales on top of a forecasted decline for the market in 2017.

The drop in sterling is also going to have an impact on UK supply chain operators, particularly transport operators, according to Elupeg, the European interest group that fosters logistics collaboration. In a statement, it said that the increase in fuel costs that would result from the drop in sterling would bring additional cost burdens to the transport sector, though it added that this would “probably drive further initiatives in horizontal collaboration” to mitigate the increases.

So far, transport operators have generally refused to comment on the situation but the UK’s Freight Transport Association (FTA) said that the costs, restrictions and bureaucracy arising from the ‘leave’ vote could disrupt the UK’s supply chains.

“Even though we are coming out of Europe politically, it remains our biggest export market and the supplier of a high proportion of our imports,” said the FTA’s CEO, David Wells. “We cannot allow new bureaucratic burdens to hamper the efficient movement of exports heading for customers and imported goods destined for British consumers.”

As one example of the potential burden on transport providers, the FTA noted the need for international road transport customs carnets, which were last used by the UK in 1992. The carnets are required to allow goods to move under customs control across international borders.

The FTA said it was calling on the government to prioritise arrangements for international freight transport in its negotiations, minimising additional legislation and keeping costs as low as possible for British businesses.

With the UK government still in total disarray at the moment, however, such practical demands look likely to fall on deaf ears, at least in the short term.