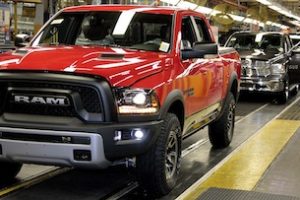 Fiat Chrysler Automobiles (FCA) is making changes to its production pattern in North America as part of efforts to focus its plants on larger, more profitable vehicles. The changes, which include the shifting of some Jeep production from the US to Mexico, have some substantial implications for its supply base and logistics.

The carmaker has revealed that it will move production of the Ram 1500 pickup truck from its Warren truck plant in Detroit to the Sterling Heights plant 10 miles (16km) to the north. It is also planning to make the replacement for the Jeep Compass and Patriot in Toluca, Mexico in the second half of this year; previously those vehicles were made in Belvidere, Illinois.

The plans were revealed by FCA’s chief executive, Sergio Marchionne, during the company’s first quarter analyst call on April 26th, although the carmaker has not officially confirmed all of the details. Marchionne also confirmed FCA’s plans to outsource production of the Chrysler 200 sedan and the compact Dodge Dart, as output of the 200 at Sterling Heights and the Dart at Belvidere ends. Talks are reportedly ongoing about which carmaker will manufacture the vehicles.

“The company will place indefinitely laid off employees in open full-time positions as they become available within the Detroit labour market, based on seniority,” said FCA in a statement.

However, in his analyst briefing Marchionne said the planned production shifts would result in a net increase in the number of workers employed in the US.

The carmaker is planning to convert the Warren Truck plant to build top-of-the-line Jeeps under the Wagoneer and Grand Wagoneer names, though a timeframe for that has not been revealed. The next generation Ram 1500 will go into production at Sterling Heights in 2018 ready for the next model year. FCA will also officially launch assembly of the 2017 Chrysler Pacifica at its Windsor plant in Ontario, Canada on May 6th.

Analysis: logistical impacts of a Mexican Jeep By Christopher LudwigIn January, Marchionne revealed that FCA would tilt its North American production base even more towards Jeep SUVs and Ram trucks to take advantage of the consumer shift in North America to buying larger (and higher profit) vehicles, a consequence of the drop in oil prices.

Although an FCA spokesperson said the carmaker would not be discussing the impact on logistics or transport planning because the moves had not been officially confirmed, the realignment of production in North America will have impacts on the inbound supply of materials and the outbound delivery of vehicles.

The shift of a compact Jeep replacement for the Compass and Patriot – which will be a single, as yet unnamed, model – in particular will involve a change in suppliers and logistics flows south to Mexico and increase vehicle exports northbound.

Switching Jeep production to Mexico is likely to increase output in Toluca substantially. Last year, Toluca built 247,300 units across the Fiat 500 and Freemont and the Dodge Journey. Of that total, the plant built around 33,000 Fiat 500s last year; by contrast, production of the Compass and Patriot came to more than 270,000 units at Belvidere, according to the Automotive News data centre. Fiat 500 production is expected to be shifted to Poland.

Even before the start of production of Jeep, FCA was already moving significant material north- and southbound between the US and Mexico. In 2014, the company told Automotive Logistics it was moving about 11,000 truckloads each year from the US and Canada to Mexico, along with 30,000 intermodal loads and 10,000 loads by rail. Northbound, it was moving 14,000 truckloads, 7,000 intermodal and 6,000 pure rail loads. Adding Jeep output, which has a highly established supplier base in the US, is likely to increase material flows southbound for inbound freight, and possibly northbound as well if suppliers are single sourced across other Jeep models built in the US.

Last month, Jeep’s global brand boss, Mike Manley, also revealed that the Compass/Patriot replacement would be unveiled first in Brazil during the third quarter and was expected to follow shortly thereafter in the US. The model will also be built at FCA’s factory in Pernambuco, in north-east Brazil, which opened last year with the production of the Jeep Renegade.

Reports and spy photos have suggested that the Compass/Patriot replacement will share a platform with the Renegade (which is also the same platform as the Fiat 500L). If that is the case, it would further globalise production of the platform – currently, FCA builds the Renegade in Melfi, Italy, Pernambuco and, since last month, in Guangzhou, China.The addition of Mexican production would likely increase global exchanges of material across these production locations.

Certainly, the large number of Jeeps from Mexico would require an increase in vehicle export flows from Toluca to the US and Canada. Last year, US sales of the Mexico-built Fiat 500 were modest at around 25,000 units; combined sales of the Compass and Patriot, by contrast, were around 185,000 units.

FCA exports from Mexico move almost entirely by rail to the US and Canada. Along with the increase in pure rail volume, the Jeep models would probably require the use of bilevel rail wagons, compared to the trilevel equipment used for the smaller 500.