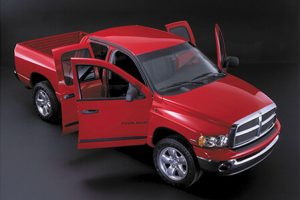 Fiat Chrysler Automobiles (FCA) has said it will reassess security measures at a shipping yard in the Detroit suburb of Warren after thieves drove away with eight Ram pick-up trucks in an early morning raid.

The theft is reported to have been carried out by a gang who drove up to the gated storage yard in a 2003 Ram truck stolen from a nearby home, offloaded drivers, cut a hole in the security fence and drove off with the new vehicles, crashing them through the gate.

They were seen being driven away in a fast-moving convoy, jumping red lights. Two of the eight trucks were later found abandoned in Detroit suburbs after apparently running out of fuel.

Manufactured at FCA’s Warren truck assembly plant, the vehicles were stored in a nearby secure and guarded yard awaiting delivery to dealerships.

Warren police commissioner Bill Dwyer was quoted by the Detroit Free Press as saying: “We do believe there was a good possibility that there was inside information given to the persons responsible for the thefts. That would include possibly a former or current employee.

“Obviously they [the thieves] knew where they were going, what they were looking for, [and in] what area to cut the fence and get into the lot where vehicles were parked. This was not a random, all-of-a-sudden thought or idea. It was well-planned for probably several weeks.”

The news source also quoted a factory employee suggesting it was “common knowledge” that keys were kept in vehicles after assembly, as separating the two would create logistical difficulties.

FCA declined to comment further except to say it was working with the Warren police department regarding the theft.

Ram was the third most sold vehicle in the US last year, behind the Ford F-Series and Chevrolet Silverados trucks.