First volumes of Mitsubishi Eclipse land in the UK 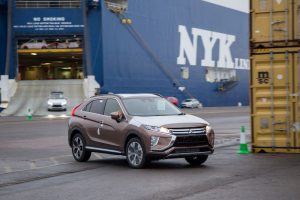 The first shipment of Mitsubishi Eclipse Cross SUVs has been delivered to the UK via Portbury Docks in Bristol, ahead of the model’s launch in the country later this month. Further shipments are planned in coming weeks, according to the carmaker.

The vehicle is being made at Mitsubishi’s plant in Okazaki, Japan, and shipped to Europe by NYK Line.

“We anticipate that the Mitsubishi Eclipse Cross will quickly become one of our most popular models and we are preparing to meet demand, while also ensuring that lead times are optimised for customers, whether they are purchasing at a dealership or through Mitsubishi Buy Online,” said Lance Bradley, managing director of Mitsubishi Motors in the UK.

In November last year, Mitsubishi Motors launched an online service in the UK allowing customers to view and purchase its current range with the same national offers as its physical showrooms. The first vehicle purchased via the online service – a Mitsubishi ASX 3 – was delivered in December.

The Eclipse Cross is launching in the UK with an exclusive ‘First Edition’ version, which is limited to a production run of 250. There will ultimately be a range of variants on offer, powered by a 1.5-litre turbocharged petrol engine mated to a six-speed manual or all-new eight-step CVT automatic transmission.