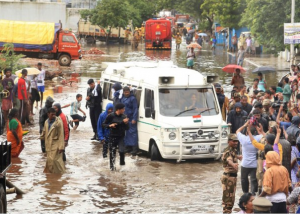 [Updated 19th November] Torrential rain in the Indian state of Tamil Nadu over the past week has led to shutdowns at a number of OEM and tier supplier plants in areas surrounding the flooded city of Chennai. A number of major carmakers operating in the area have been affected by what has been described as the heaviest rainfall to hit the area in more than a decade, including Ashok Leyland, BMW, Daimler India Commercial Vehicles (DICV), Ford and Renault-Nissan, among others. The rain has caused flooding at certain facilities and disrupted the delivery of inbound parts, as well as the movement of vehicles outbound to dealers. Flooded roads and rail tracks have also prevented workers from reaching the factories.

Details of the full impact of the flooding on individual plants are sketchy and carmakers have been reserved in their comment. However, most were closed for two days on Monday and Tuesday this week (16-17th November), which for most vehicle manufacturers equates to production of between 1,200 and 1,800 vehicles (and 1,500 for two-wheeler OEMs such as Yamaha and Royal Enfield), according to data from analyst firm Frost & Sullivan.

“Due to heavy rains and significant flooding in the Chennai area, we have halted production at our Chennai assembly and engine plants,” a spokesperson for Ford told Automotive Logistics. “We continue to monitor the situation closely and will return to normal operations as soon as conditions improve.”

In a statement sent to industry analyst, IHS Automotive, Ford said it had resumed output at the plant on Wednesday (18th November) and would “assess the impact in due course”.

BMW also confirmed on Monday and Tuesday because of disruption to transport routes but said that its dealership – Kun Exclusive – had remained open.

A spokesperson for DICV, meanwhile, confirmed that many low-lying areas in Chennai had suffered severe water logging and electricity outage and that its plant at Oragadam had been affected.

“Due to the problems of accessibility – as public roads were flooded – DICV stopped production on 16-17th November and declared it a holiday for employees, to ensure their safety,” he said. “These two non-production days will be compensated by running production and offices on the next two Saturdays (21st and 28th November).”

However, the DICV spokesperson said there had been no damage to the assembly plant or its equipment. Neither had there been a shortage of parts inbound or delay in the delivery of trucks to the dealerships. Production was scheduled to start again on Wednesday (18th November) as the water levels began to recede.

Outbound delays
According to Collin Noronha, senior research analyst, Automotive and Transportation, Frost & Sullivan, most of the OEMs affected by closures due to the floods are as confident as DICV of making up the shortfall in production, in part because they are not running at full utilisation and will be able to ramp up production in the coming weeks.

“However, it is the dispatching that is going to be primarily affected,” said Noronha. “This is not just for domestic shipments but there could be a small knock on effect for any exported goods. Obviously the rains have created a backlog to the ports as well.”

This was backed up by Hyundai, which confirmed that it did not suffer production disruption but said outbound vehicle shipments had been affected because car carriers were stranded in the floods.

“Due to incessant rains, the waiting period for models may get impacted by a week to 10 days," said Rakesh Srivastava, senior vice president, sales and marketing at Hyundai Motor India.

That delay period was backed up by Noronha who told Automotive Logistics that dispatches were delayed and there was a lot of stock sitting in yards, as well as vehicles already shipped out from the plant but stuck in transit.

“The bad rains and unsafe conditions mean some of these deliveries are going to be delayed by between 7-10 days,” he said. “So any customers that were expecting their vehicles some time this week are now very likely to receive them from the end of next week, or the beginning of the week after.”

Cost of inventory shortage
Those problems could be compounded if the rains continue, both for outbound and inbound deliveries. According to Anil Sharma, senior research analyst at IHS Automotive, while most automakers have suffered production losses in the region, it is likely going to be a bigger challenge to arrange logistics if the rains continue.

“Since most automakers now operate with minimal component inventory, securing parts from component vendors will be difficult as the met department has warned of more rains on Wednesday [18th November],” said Sharma. “Similar is the case with finished vehicles whose delivery to dealerships is going to be delayed. This leaves Hyundai and Renault in a precarious situation, which operate their solo Indian manufacturing bases in the city.”

The consequences of such delays on the inbound delivery of parts has begun to have a financial cost for OEMs and suppliers alike according to Noronha.

“Most of the parts for these organisations are being supplied on a just-in-time (JIT) basis and there is a billing cycle that all of the vendors work on for every dispatch of parts that they supply to the plant,” explained Noronha. “So they have arrived at an estimate of what the losses are and from the OEM standpoint it is roughly between $22m-$27m [across all the carmakers affected in Chennai].

Noronha went on to say that it could be higher when accounting for any losses incurred by other parties in the value chain, such as component suppliers and LSPs. “They are now having to work double time to support the OEM in catching up,” he noted.

The flooding has had a more devastating humanitarian impact, with more than 70 fatalities and 1,400 people needing to be rescued across the state. The army, airforce and the National Disaster Response Force have been deployed on relief and rescue operations. Power supplies have been temporarily cut in a number of areas as a precaution, according to local news sources.

“While the air force and army have joined rescue operations, the low-lying geography of the city means much now depends how long the rains continue,” added Sharma.