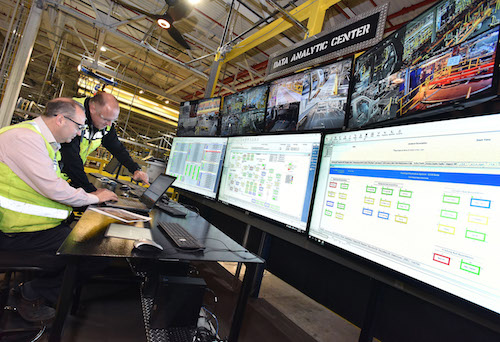 Ford has invested a further $25m to increase line speed at its plant in Louisville, Kentucky to meet a 25% increase in output of the Lincoln Navigator and Ford Expedition SUV models as retail sales surge in the US.

Its investment there includes 400 new robots and a data analytics hub that relays minute-by-minute production updates via seven large screens to let plant officials know if production is meeting hourly targets or if there is a problem on the line.

The company said the data updates also alerted workers to any pending parts shortages, so they could arrange for new batches to be delivered to workstations before running out.

Ford has also put in place what it terms “an enormous spare parts vending machine” that allows workers to more quickly locate parts while keeping inventory at optimal levels, and installed a 3D printer onsite to print individual parts for tools needed to keep the plant running.

“Manufacturing a prototype part using traditional methods can take 8-16 weeks at a cost of more than $250,000 in tooling alone,” said the OEM in a statement. “Producing the same part using 3D printing can take days – and sometimes just hours – and can be done for a few hundred to a few thousand dollars.”

The company would not provide further information on any of these innovations, however.

Record salesDespite alluding to a 25% increase in production at the Kentucky plant, Ford declined to specify output numbers there, saying that it would only provide such figures on an annual basis. Last year it made 400,000 units there, including the Lincoln Navigator, Ford Expedition and Ford Super Duty.

“Navigator retail sales were up triple digits in every region of the country last month,” said Ford in its statement. “Navigator sales more than doubled last month, thanks to growth in key markets including Florida, Texas and California.”

Figures released by the company show that in January, sales of the Navigator were up 97.5% over the same month in 2017 – welcome news, given that Lincoln SUV sales overall were down nearly 20%.

While sales figures for December and January appear to show a decline for the Expedition – down 15.4% in January on the same month last year and down 37% on the previous month – the company is reporting retail (dealer) sales up nearly 57% in January. According to Ford’s head of US sales analysis, Erich Merkle, overall sales are down despite the retail rise because of fleet order timing.

“Right now, we are doing everything we can to fill dealer lots first,” Merkle told Automotive Logistics. “We plan to fill fleet orders only after we get our dealers in a better inventory position. Expedition average days to turn on a dealer lot is just seven days. Dealers want and need more inventory.”

Ford said it was working diligently to get stock out to its dealers, including with its outbound transport providers, but declined again to go into any detail.