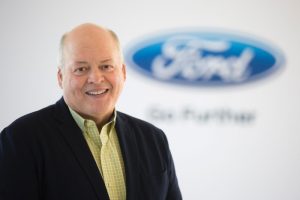 Ford has named Jim Hackett (pictured) as its new president and CEO, replacing Mark Fields, who is retiring after 28 years with the company.

Jim Hackett moves to the head of Ford from his role as chairman of Ford Smart Mobility, the subsidiary Ford set up to develop emerging mobility services. He was also made a member of the board of directors in 2013. Prior to that, he had a 30-year career with leading office furniture maker Steelcase, which included being CEO for 20 years.

“We’re moving from a position of strength to transform Ford for the future,” said executive chairman Bill Ford. “Jim Hackett is the right CEO to lead Ford during this transformative period for the auto industry and the broader mobility space. He’s a true visionary who brings a unique, human-centred leadership approach to our culture, products and services that will unlock the potential of our people and our business.”

According to the company, Hackett will be helping Ford to focus on three priorities: sharpening operational execution, modernising the business using new tools and techniques to promote innovation, and ensuring Ford has “the right culture, talent, strategic processes and nimbleness to succeed as society’s needs and consumer behaviour change over time”.

Joe Hinrichs, meanwhile, will be overseeing Ford’s global product development, manufacturing and labour affairs, quality, purchasing, sustainability, and environmental and safety engineering. Hinrichs has been executive vice-president and president of The Americas since December 2012.

As executive vice-president and president of global markets, Jim Farley will oversee Ford’s business units in The Americas, Europe, Middle East and Africa (EMEA) and Asia Pacific. He will also look after Lincoln Motor Company and global marketing sales and service. Farley has served as executive vice-president and president, Ford of Europe, Middle East and Africa since January 2015.

“We are fortunate to have three dynamic and talented leaders in Jim Farley, Joe Hinrichs and Marcy Klevorn taking on greater responsibility,” Bill Ford said. “Each has a track record of driving innovation, cost-efficiency and delivering results around the world. They will work closely with Jim Hackett to lead Ford’s day-to-day operations, build our brand and capitalise on emerging opportunities.”

Last week, meanwhile, Ford invested $350m to upgrade its Livonia Transmission Plant in Michigan. The investment included the addition of a new transmission for front-wheel-drive vehicles. The Livonia plant builds six-speed and 10-speed transmissions used in a number of vehicles including the Mustang, F-150, Transit and Expedition.