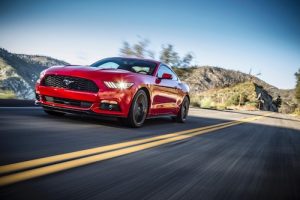 Ford is doubling the number of Mustang sports cars it exports from the US every year with more than 98,000 cars shipped to customers outside the US since 2015, according to the latest data from the carmaker.

The OEM said the Mustang was the best selling sports car in the world last year, according to its analysis of registration data provided by analyst IHS Markit. Global sales were up 6% on 2015 with almost 45,000 vehicles sold outside the US.

Ford began global exports of the Mustang from its Flat Rock assembly plant in Michigan in January 2015, with the first models going to China via the port of Portland in Oregon, on the US West Coast. Mustang exports to Europe from the US followed by the middle of the same year via the port of Baltimore on the US East Coast.

The company said last week that it doubled the percentage of exports to 17.5% between 2015 and 2016 and furthermore, expected export growth to reach 30% for the 2017 Mustang.

This year, Ford will expand Mustang exports to six new countries including Brazil, Africa’s Ivory Coast and the Palau Islands, which are part of the Micronesia region in the western Pacific Ocean. The other three markets have yet to be announced but the move means the vehicle will be on sale in more than 140 countries worldwide.

“The legacy of Mustang continues to grow, and in places it never reached before,” said Mark Schaller, Ford Mustang marketing manager. “We continue to make it available in new markets and drivers in those markets continue to respond with resounding approval.”

Ford is exporting the Mustang from eight US ports including Baltimore and Portland. The others are Jacksonville, Palm Beach, Port Everglades and Newark on the East Coast; and Hueneme and San Diego on the West Coast.

Since 2015, more than 395,000 sixth-generation Mustangs have been made at the Flat Rock assembly plant.