Ford rings the changes at Valencia

Ford’s plant in Valencia, Spain has been transformed into one of its busiest and most complex supply chains globally, with five models across two assembly lines, and a global export distribution. Marcus Williams considers why Ford chose it 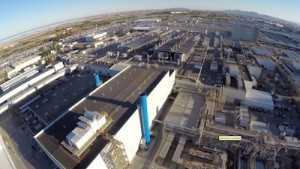 The consolidation of production at Almussafes, just outside Valencia on Spain’s Mediterranean coast, involved the biggest investment in the history of Spain’s car industry at €2.3 billion ($2.5 billion) between 2011 and 2014. During this change the plant has launched four new models and variants, while the vehicles produced here are exclusive to the plant. It has also added an additional assembly line and increased trim lines.

Current output is around 1,800 vehicles a day, with variants of the Mondeo, Kuga, Transit Connect and Tourneo connect vans. In May this year Ford Spain added the S-MAX, Galaxy people carrier and Vignale Mondeo. This year output is expected to reach 400,000 units across all variants, up from 283,000 in 2014. The Galaxy introduction completes Valencia’s transformation and will increase installed capacity to 450,000 vehicles a year. Moreover, the plant is now a global exporter, with 80% of its production destined to as many as 75 countries.

Ford also has an engine plant on site that made 504,475 engines last year. Though finished engine output could be affected by the shift in Ford’s EcoBoost engines for the North American market to its Cleveland, Ohio plant, production of the engine for the European market will continue to grow and Valencia will still provide engine castings and parts for Cleveland.

So why Valencia for this precipitous increase in output and supply rather than, for example, Ford’s German plants in Saarlouis or Cologne, or indeed the 11 it has in North America, given that half of the new suppliers for the added models in Valencia are actually based there?

Ford declines to comment on specific sourcing decisions between plants, however there is little doubt that the Valencia plant has emerged more competitive than others, not least the Genk, Belgium plant the carmaker shuttered last year. Some of that has been down to macro-economic conditions: economic reforms following the euro crisis have made Spain more attractive, including more flexible labour laws. A weaker euro, meanwhile, will also be a boost to exports, including to North America.

The plant also has a strong infrastructure and technology base, with one of the highest efficiency rates amongst Ford’s global facilities. It has a history of producing multiple models over the years, including the Fiesta, Escort, Orion, Focus, Ka, C-Max and Mazda2. To handle the added complexity of the new body styles, Ford has added a new 89,000 sq.m bodyshop.

This manufacturing productivity is combined with good logistical access and materials management. There is a supplier park on site, while there is also a strong concentration of suppliers within close range of the factory. After expanding its overall space, the plant now has around 35,000 sq.m of logistics space including warehousing, docks, internal kitting and sequencing areas, plus a supplier canopy to receive sequenced parts from the adjacent supplier park.

There are also four logistics suppliers based on site carrying out various material handling and transport activities, including MLV, Walkerpack, Valmo and Know-How Logistics.

Valencia benefits from good port access, which is important given its global supplier base as well as for vehicle exports. The port of Valencia is just 20km from the plant, where Ford expects to ship 190,000 vehicles per year. The carmaker has also added the port of Sagunto, 60km from the plant, where Ford signed a contract with Noatum Terminal Polivalente Sagunto to export 100,000 finished vehicles from its terminal per year.

Ford has also requested a further 50,000 sq.m concession at the port of Valencia. According to the port authority, this would be on the Dique del Este quay, home to Valencia Terminal Europa that handles the majority of finished vehicles passing through the port. Around 40% of the total 495,000 vehicles handled at Valencia port in 2014 were for Ford.

Complex considerations for inbound
Inbound material flows have become even more complex at Valencia with the increase in model variety and output. The new models have led to an increase of 252 new suppliers, many of them linked to global platforms across multiple continents. Of the new suppliers, 128 are in Europe, 101 are from the US and several are also from Africa and Asia. In total, around 50% of these suppliers are located more than 4,000km from the plant meaning inventory transit times and security stock have also increased, according to Sonia Guerola, a lead engineer at Ford Valencia.

At the same time, however, there is also a high concentration of local suppliers for Valencia. Ford has incorporated more suppliers at the plant’s supplier park, for example, with 12 now based in Almussafes, while there are 76 overall in Valencia province, roughly within a 50km radius.

Along with parts from more locations, the number of parts moving to line has also risen substantially. For example, Guerola points out that variants of the Transit Connect and Mondeo have meant an increase of 150% in part numbers – from 7,200 to 18,077 – and a 250% rise in the volume of parts. The move also meant an 80% jump in parts complexity in 2014 for parts on the Kuga, Connect and Mondeo.

The addition of new models meant an expansion of the assembly space into areas previously used for logistics functions while there was simultaneously and demand for more warehousing to accommodate the increase in parts.

This growth led to a scramble for space while additional warehousing was built. “For storage we had to use streets, gardens, offices and everything else we could find in the plant as a warehouse space,” says Guerola.

With the increase in production, Ford estimates that around 3.6m parts are delivered to the line each day at the plant. To manage this, the carmaker sequences more than 70% of parts. Parts that are sequenced arrive in the proper packaging to the storage warehouse and are delivered to the sequencing and kitting area in the same packaging.

Single parts are decanted into the kit box or sequencing trolley, which is the way they arrive to the line.

In line with the global Ford Production System, production components are now transported alongside the vehicle in a pre-assembled kit, to increase efficiency. Kitted parts are delivered in their shipping packaging to the kitting area; the kit box is configured with several parts and delivered to the line in a trolley.

Logistics of change
There was also considerable logistics complexity in the plant’s transformation, including the introduction of the new models and the simultaneous shift of C-Max production to the Saarlouis plant.

At the beginning of 2013 the plant was making the C-Max and Kuga models. It then began the process of introducing the Mondeo, S-Max and Transit Connect while phasing out and moving production of the C-Max, both Grand and Compact versions, to Saarlouis.

“It meant moving not only the parts but also the tools, the materials and the dies, amongst many other things,” says Sonia Guerola. “And we had to do it with a minimisation of cost.” Ford handled the logistics behind the movement of all that material in-house.

In July 2014 the production of the C-Max Grand finished in Valencia plant, which freed up space for Kuga production on the second production line. The team at Ford had to update the systems that called parts to the line and at that stage about 70% of the parts were moved to the their final location.

The other consideration was the move over of production lines to new products. For instance, Ford Valencia now has three areas for trim on the assembly lines. The plant originally had one production line but has moved to two.

“We had to allocate parts close to the production line for assembly of the Kuga while the C-Max was still alive,” says Guerola. “We had to allocate current parts in the production line to new positions and because we shared parts with C-Max we had some parts that are common with the Kuga. For that we had space, but for new parts, exclusive to the Kuga, there needed to be stock close to the line.”

This coordination has been critical for Ford to avoid disruption of production and supply for either plant. Its success so far has been thanks in no small part to a carefully crafted plan for logistics, material flow and vehicle movements. With rising output and supply complexity, such orchestration will become even more critical.