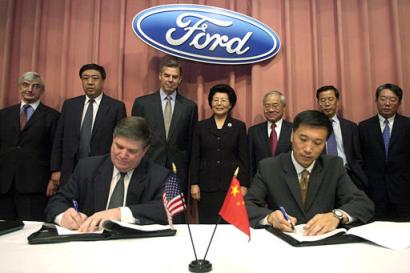 Amidst ever-climbing sales figures in the Chinese market, Ford is likely to expand its projects and production platforms in China, said David Schoch, president of Ford’s Asia Pacific region, in a statement last week.

The automaker’s presence in the ASEAN region included 14 vehicle assembly and powertrain plants in 2012. By 2015, this figure is expected to grow to 24, seven of which (for new assembly and engine plants) are in China. By 2020, the global automotive industry will reach approximately 109m vehicles, 32m of which are expected to be sold in the country.

Schoch said in a press conference in Detroit last week that the OEM needed more capacity to cope with this growing demand. He said that the company was considering expansion passed the initial mid-decade plan. “I’m pleased with the progress we’re making. I’d like to be going faster,” he said.

Ford has five assembly and powertrain plants under construction in ASEAN countries. This will push the OEM’s installed capacity to 2.9m units by 2015, although with China’s car sales set to increase, Ford may need to cast the net wider to meet demand. Until September of this year, Ford’s sales in China were up 51% from last year, with more than 600,000 cars sold.

Although General Motors and Volkswagen currently sell the most vehicles in the country, new dealerships for the Lincoln luxury brand, expected in 2014 in the eastern cities of Beijing, Shanghai and Guangzhou, may help to narrow the gap between them.