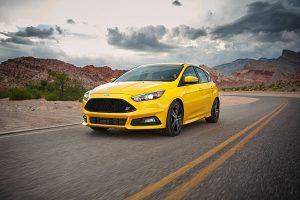 Ford’s new leadership team has announced the company will import the new Focus model into the US from China, a shift from its previous plan to produce the car across the border in Mexico, and becoming the first OEM to import major volumes from China to North America.

Joe Hinrichs, the recently appointed president of global operations, said producing the car at one of its existing facilities in Chongqing would save the company as much as $1 billion in investment costs versus the original plan – $500m on top of the $500m savings announced earlier this year by cancelling plans for an all-new manufacturing facility in San Luis Potosi, Mexico, and moving Focus production to Ford’s Hermosillo, Mexico, plant.

“Finding a more cost-effective way to deliver the next Focus programme in North America is a better plan, allowing us to redeploy the money we save into areas of growth for the company – especially sport utilities, commercial vehicles, performance vehicles, as well as mobility, autonomous vehicles and electrified vehicles,” Hinrichs said.

At the start of this year Ford announced it was cancelling plans to build an assembly plant in San Luis Potosi, in north-central Mexico because of slowing demand for the smaller vehicles the plant was going to build, rather than criticism it had received from president Donald Trump over production in Mexico for export to the US.

As planned, however, it said at the time that it would still move smaller models such as the Focus to Mexico, though it will build them at existing plants there.

Those decisions were made under the leadership of Mark Fields, who recently retired after 28 years with the company. In May, Jim Hackett was named as his replacement and there were a swathe of further management changes, including the naming of Hinrichs in the global operations role.

Joint venture growthThe Changan Ford joint venture in China has been expanding its presence in China since it opened its first vehicle assembly plant in Chongqing in 2004.

Its second vehicle assembly plant, also located in Chongqing, opened in 2012 and is almost ten times the area of the original plant. It produces the Ford Focus and the Ford Kuga compact SUV. Together the two plants offer an annual production capacity of 600,000 units.

Changan Ford’s third plant in Chongqing opened in 2014 to produce the Ford Escort, with an annual capacity of 360,000 units.

In 2015, it opened a plant in Hangzhou, 200km south of Shanghai, which produces a version of the Ford Edge, a mid-size crossover vehicle, designed exclusively for the Chinese market; Hangzhou has an annual capacity of 250,000 units.

Changan Ford’s fifth and most recent assembly plant is in Harbin, which opened in 2016 in the remote north-east province of Heilongjiang; the plant also produces the Ford Focus.

Production of the new Focus will start in the second half of 2019 with the current generation of the Focus ending production at the company’s Michigan plant in mid-2018. Almost 170,000 Focus vehicles were sold in the US last year.

Following that, the Michigan plant will be converted to produce the Ranger midsize pickup truck in late 2018 and the Bronco midsize SUV in 2020.

According to Ford, while most new North American Focus models initially will come from China, additional variants will be imported from Europe at a later stage.

The carmaker also announced it would be investing $900m in its Kentucky Truck Plant to build the new Ford Expedition and Lincoln Navigator. Production will start later this year.

Both cars will be exported to more than 55 markets globally – including sending the Navigator to China.