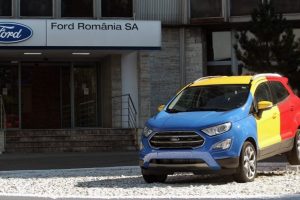 Ford is investing up to €200m ($235m) to manufacture a second vehicle at its Craiova assembly plant in Romania, saying the planned expenditure is a sign of the company’s trust in government promises to deliver key upgrades infrastructure and logistics improvements.

“Ford has discussed with the government the key infrastructure projects that are most critical to our operations and that would support future growth,” a spokesperson for Ford of Europe told Automotive Logistics.

According to Ford the government has indicated that it will prioritise the following projects: the Pitesti-Sibiu highway; Craiova-Pitesti express road (with the two ring roads, Slatina and Bals); the rehabilitation of Timisoara-Craiova and Craiova-Calafat rail links; and the Craiova Intermodal Transport Terminal.

“It is important to ensure there is a clear and visible timetable on implementation,” said Ford. “The tenders for Craiova-Pitesti express road and Pitesti-Sibiu highway have already been launched, but keeping to the calendar announced is always a challenge in Romania. We would like firm commitments from the government that the announced calendar will be maintained.”

The production start date will be confirmed closer to launch, as will the model to be built, Ford said. The new vehicle will join the EcoSport, a small SUV which has been rolling off the assembly lines at Craiova since last October.

That has already significantly increased inbound and outbound operations, said Ford's spokesperson, adding: “With the second vehicle coming now to Craiova, the current limitations of Romanian infrastructure raise a question mark on the overall competitiveness of our Romanian site.”

Ford said its investment was based on the government’s promises to deliver key upgrades to the transport infrastructure and any delay would significantly constrain the efforts made by the carmaker and its suppliers to move increased volumes of vehicles and components.

“We are committed to working with the government to ensure these vital road and rail upgrades are completed,” added the spokesperson.

Ford declined to give further details about arrangements made with component suppliers and logistics service providers, including transport of finished vehicles, or about what the €200m investment will pay for.

To enable a second vehicle to be produced at Craiova, Ford Romania expects to hire around 1,500 basic and skilled operators for a third shift to augment the current workforce of more than 4,400.

Steven Armstrong, president and CEO Ford of Europe, Middle East and Africa, said: “The addition of this second vehicle is a testament to the operational flexibility of our Craiova plant and reflects the strong partnerships we have with local suppliers and the community.”

The new investment takes the company’s total capital expenditure in its Romanian manufacturing operations to nearly €1.5 billion since acquiring Craiova in 2008. The latest upgrades included more than 550 robots being installed to improve efficiency and quality in the paint, trim, chassis and body shops.