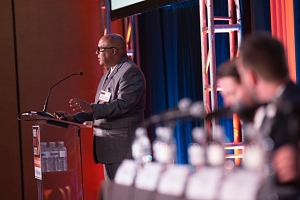 Honda has drastically reduced incidents of damage and vandalism on vehicles that it exports from Mexico beyond North America, as well as vehicles shipped to Mexico, thanks to a number of route and transport changes.

Charles Franklin, manager of export logistics at American Honda (pictured), says his company had zero incidences of vandalism to vehicles he was moving in and out of Mexico – which excludes those it ships to the US and Canada – in January and February of this year. That is down from a peak of as many as 600 vehicles per month; last year, around 3,000 vehicles of Honda's Mexico exports beyond North America had incidents of damage.

Franklin, speaking at the Finished Vehicles North America conference this week, said this was achieved thanks to a number of routing changes, though he declined to into specifics, citing that capacity and facility space was already so limited in Mexico.

“We changed our routing and challenged traditional thoughts for moving vehicles," said Franklin. "For outbound [exports] from Mexico we made a change on February 1st last year and since then we have had only six cars vandalised and that was just kids throwing rocks off a bridge and not by the professionals.”

Franklin said the company had also just recently implemented some changes to vehicles it imports to Mexico from the US and Canada, which included switching to short sea shipping from rail.

“To date it has been effective. Naturally the challenge to short sea versus railing all the way is trying to make that cost similar. Instead of having one provider carrying it all the way, you've got two or three guys touching the car and every touch is an opportunity for damage.”

Late last year it emerged that the Mexican government had been deploying troops since the autumn at various troubled areas in response to rising vandalism and theft targeting both railway lines and automotive cargo.

According to data from AMIA, the Mexican automotive association, Honda exported 46,500 vehicles from Mexico to destinations beyond the US and Canada from its two plants in Mexico. Honda also ships about 60,000 vehicles to Mexico each year from the US or Canada.

The majority of its volume from Mexico moves northbound to the US and Canada, reaching 159,000 units last year, which move northbound by both rail and short sea. In a recent interview with Finished Vehicle Logistics, American Honda revealed that damage has been an issue. One of the vandalism hotspots is Celaya, where Honda has a major car plant. Celaya is the site of an interchange between KCSM and FXE, where trains have to slow down considerably being close to the centre of the city, providing a good opportunity for those intent on theft and vandalism. However, damage rates have been helped lately by the troop deployment.

At the Automotive Logistics Mexico conference in February, a number of other OEMs also confirmed damage issues; Volkswagen said it was looking at more short sea options as a solution to the problem. VW’s Alfonso Guttierez, said his firm had seen high levels of damage on spot shipments though there had been an improvement in the new year. “The problem has been controlled and hopefully this is long term, otherwise we could look at short-sea moves to the [US] west coast,” he confirmed.

The problem was one of cost, he added, as damage to rail cars risked increasing the rates charged on the routes affected.