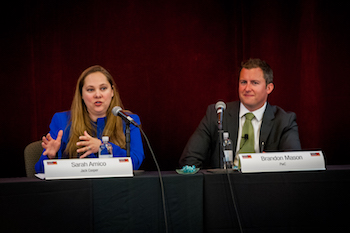 Wages in Mexico are going to be forced upwards as a shortage of skilled workers is exacerbated by a 51% increase in vehicle production by 2022, delegates at this week's Finished Vehicle Logistics North America conference in California were told.

North America as a whole is set to enjoy another bumper year for vehicle sales and production, while investment continues to flow into both US and, especially, Mexico, with a space of new plants opening there. One of the major reasons for the growth in Mexican production is the difference in wages between the US, Mexico and Canada for OEM and tier supplier factory workers. However, the role of logistics is also playing an important role, which may become even more important in the coming years, especially as Mexican wages rise .

Speaking at the opening session of the conference in Newport Beach, Brandon Mason at PwC Autofacts (pictured, right) forecasted that 2016 would be a peak year for vehicle sales in the US, at 17.8m units. Sales are then likely to decline over the next two years – including a mild recession predicted for 2018 – and won't recover the levels of this year until 2020, he said.

In Mexico, a combination of capacity expansion at existing facilities and investment in new plants is expected to result in significant assembly growth, driven by record vehicle demand in North America and low manufacturing costs. Of those manufacturing costs, wages are perhaps the biggest factor in the race south. According to data from government sources that PwC has found, Mexico has a clear advantage here: the average hourly wage in for a factory worker in the US is $22, while it is $34 in Canada and just $6 in Mexico (as of 2013 data, the latest for which all three countries were available). But it is not likely to stay like that as production increases raise demand for skilled labour, Mason warned.

“Inevitably, labour costs will increase in Mexico because there is a huge demand for skilled labour and there is not enough of it,” he said. “There will be some wage wars battled in order to get that limited amount of talent from all this new capacity that is coming online.”

Mason said every company had its own business case to work out in terms of what that threshold wage number was, but was also careful to stress the importance of total costs, not just labour costs, in deciding on the competitiveness of a particular plant location.

"It is not just the labour cost, it is the logistics costs that are involved in that decision – and that is different for every OEM,” said Mason. “The companies [General Motors and Volvo Cars] that are importing vehicles from China have obviously made the business decision that it has got to be cheaper and to their advantage to import it than build it in Mexico. But every case is different and depends on the type of vehicle and the volume you are talking about, as well as the logistics costs and agreements.”

Mexico clearly has an advantage in its proximity to both the US and its southern neighbours and the transport efficiencies gained from that could help mitigate the increase in real wages that is coming.

Sarah Amico at Jack Cooper Transport (pictured, left) echoed Mason's point about total costs, stressing that it wasn't just labour cost that was driving the competitiveness of the Mexican market but other factors, including its location.

“The geographic proximity is still a true gift,” said Amico. “Where I would look in addition to labour cost is the rail infrastructure and its development there. I would also look at some of the cross-border trucking regulatory controls. I would track those two very closely to assess the relative competitiveness of the market in Mexico.”

China pays a roughly equivalent wage to Mexico, next to the higher wages in Japan and South Korea, but again there are logistics considerations, Mason pointed out.

“Think about the fully loaded cost in the US versus the import cost from China and compare that with building it in Mexico, which is part of NAFTA,” he said. “I think Mexico is still relatively advantageous. The advantage for China in future may be that you have critical mass, so you can justify that added expense in building [some models] there for local demand and then exporting.”