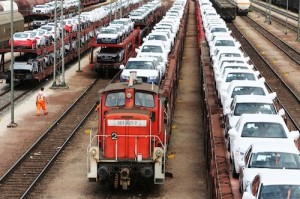 Rail freight services in Germany have been disrupted again by strike action staged by the German Train Drivers Union, GDL. The action, which affected freight movements for 66 hours across four days last week from Tuesday, hit services provided by Deutsche Bahn’s subsidiary DB Schenker. The company said two thirds of its freight trains were running during the strike.

The latest action follows a breakdown in negotiations between the union and Deutsche Bahn over pay and conditions. The union is demanding a 5% pay rise and a reduced working week to 38 hours. Negotiations have now been resumed. GDL represents about 20,000 of DB's nearly 200,000 workers.

A spokesperson for DB Schenker said that it maintained permanent communication with its OEM customers and managed to keep the impact on services as low as possible. The company has already made up the backlog of non-running trains and reported that normal operations have been restored.

“Altogether, this [clearing of the backlog] is the result of the good crisis management, among other things by the European operations centre in Frankfurt,” said the spokesperson.

Carmakers in Germany have not reported any significant disruption as a consequence of the strike. A spokesperson for Volkswagen said the company had managed to maintain production during the action. BMW, as well as GM Europe’s Opel division, also said there was no major impact their production facilities and that they were able to reallocate inbound automotive shipments from rail to road.

“If necessary, and to ensure the smooth running of the logistic sequence, we change from rail transportation to shipping trucks,” confirmed a spokesperson for Adam Opel. “This always worked well in the past, as well in this case.”

BMW added that on the outbound side it was able to absorb the delays internally.

Last year DB Schenker established a crisis team at its European control centre in Frankfurt with the aim of ensuring that at least half of the scheduled rail freight was moved despite the widespread strike action.