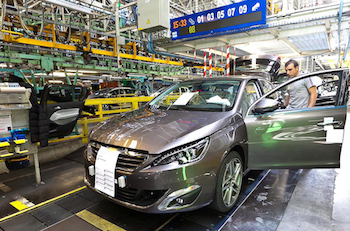 Production of the Peugeot 308 was halted for a second day at the French carmaker's Sochaux plant in eastern France last week due to a shortage of gearboxes.

Taking potential orders into account, the best solution was to temporarily halt the compact car’s assembly at the plant, a company spokesperson said.

[mpu_ad]Though the production of the new MB6 gearbox is now on track, with manufacturing increasing at the PSA Group's Valenciennes factory, the OEM warned of further stoppages at group factories in the coming weeks.

However, it said that such stoppages would be short-lived, “one-off” events, with minor commercial implications as the group would catch up on lost production. PSA does not anticipate any impact on sales volumes during the second half of the year, it added.