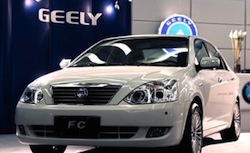 Chinese carmaker Geely is planning volume production at a $500m joint-venture plant in Belarus for supply to the local market as well as to Russia and Ukraine.

The carmaker signed an agreement with the Belarus government for the joint venture in December 2011 and the latest announcement states that the facility will have an initial planned capacity of 120,000 vehicles. Geely said the capacity of the plant would eventually rise to meet demand in Russian and Ukraine, as well as other CIS countries.

The announcement was made by Belarus’s industry minister Dmitry Katerinich at a meeting in Beijing this July and reported on the Republic of Belarus’ official website.

“We have held negotiations with the Geely company,” said Katerinich. “Following these talks a cooperation agreement will be signed today. According to this document, we will significantly increase investment in this car manufacturer which is being created in Belarus. The investment will exceed $500m.”

Katerinich is also reported as stating that a decision has been taken to construct the factory in line with Volvo company standards. Geely Holding bought Volvo from Ford in 2010 for $1.8m.

Geely’s sales in the region are reported to be strong. Quoting the Association of European Businesses, Reuters reported that sales of Geely cars increased by 87% in the first six months of 2013, year on year, to 11,700 units. Growth in Russia comes at a time when the market has seen new car sales fall for the fourth month in a row.

The joint venture company SZAO BelGee was established in Belarus in December 2011, according to Belarus news source BeITA. Its founders are BelAZ (50% of stock), the Chinese company Geely (32.5%) and the Belarusian-Chinese automobile parts manufacturer Soyuzavtotekhnologii. The initial investment was $245m.