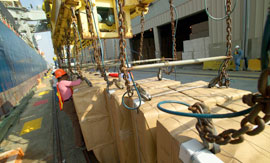 The Georgia Ports Authority (GPA), which represent various ports in the southern US state of Georgia, has reported record volumes for the fiscal year 2012-2013 in total tonnage, including automotive and machinery equipment, bulk-cargo and freight moved by intermodal rail. The state’s deepwater ports provide a key base for both the automotive and manufacturing sectors.

GPA executive director Curtis Foltz said that the records were achieved through “the strength of US exports and the GPA’s varied cargo spectrum”.

In part, the automotive and machinery volume improvements were the results of business with new customers at the Colonel Island’s Terminal at the port of Brunswick, including Toyota and Subaru. Other factors includes growth by machinery manufacturer, Caterpillar.

The port of Brunswick is the third busiest port in the US for total ro-ro cargo, and the second busiest port for the import of such cargo.

The port also saw record movements for intermodal rail. Of the total container volume, a record number of 314,623 containers were moved by rail.

GPA Board chairperson Robert Jepson stated that there were “exciting developments ahead” for the GPA’s customer base and for the Savannah Harbor Expansion Project – which aims to deepen the river channel leading to the Port of Savannah, currently the second busiest container port for the export of American goods by tonnage in 2011.

“Georgia’s deepwater ports and inland barge terminals support more than 352,000 jobs throughout the state annually and contribute $18.5 billion in income, $66.9 billion in revenue and $2.5 billion in state and local taxes to Georgia’s economy,” said Jepson.