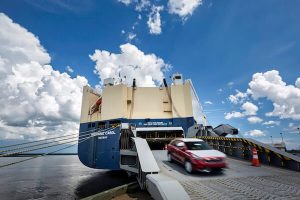 The linked ports of Brunswick and Savannah in Georgia, in the south-east US, are playing a growing role in the supply chain of North America’s leading vehicle manufacturers, delegates at the Georgia Foreign Trade Conference were told recently.

Speaking at the event, KIA announced it was to start dispatching its new, eight-person Telluride SUV from the port of Brunswick this month. The South Korean OEM has been using Savannah to ship parts in since 2009, when Kia Motors Manufacturing Georgia (KMMG) first began assembling vehicles at West Point for the domestic US market. Both Brunswick and Savannah are operated by the Georgia Ports Authority (GPA).

“From the support we receive from GPA with our inbound parts from our global supply chain to supporting our export of finished vehicles to current and future markets, GPA will play an important role,” said Stuart Countess, KMMG’s chief administrative officer and vice-president.

“[Kia’s] decision to export the Telluride via Brunswick highlights the benefits of having North America’s largest container port and largest autoport within 85 miles [136km] of each other,” commented Griff Lynch, executive director of the GPA.

Speaking at the same event, Mark Boucher, director of vehicle logistics for Volkswagen Group of America, outlined Savannah’s role in handling parts destined for VW’s Chattanooga plant and Brunswick’s in handling exports of the Passat and Atlas.

Boucher said VW would soon launch a new version of the Passat and that the company had “robust plans” to deliver the Atlas to more than 30 export destinations this year.

Jay Johnson, intercontinental logistics specialist for Volkswagen, who oversees the import of parts supplying Chattanooga, said: “We continue to build our partnership as our needs change and as the GPA continues to add more logistics value by improvements.”

Gerry Lee, vice-president of planning and logistics for Subaru of America, meanwhile, said Subaru relied on the GPA to import its Forester, Crosstrek, WRX and BRZ models. “The port of Brunswick is the right fit for Subaru’s vehicle supply chain because it is a great location to support the retailers in our Atlanta and Orlando sales zones,” said Lee.

GPA also highlighted its operations for General Motors and Mercedes-Benz at the event.

Parts for GM’s Acadia SUV, built at Spring Hill, Tennessee, come in via Savannah and, starting this year, GM will export around 12,000 Acadia SUVs through Ocean Terminal, it said. Parts are also imported through Savannah for Mercedes-Benz’s plant in Vance, Alabama, while its finished vehicles are exported via Brunswick.