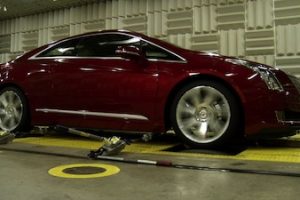 [Updated July 14th] GM has avoided the threat of closure at 19 of its assembly plants across North America following a hearing at the US Bankruptcy Court for the State of Massachusetts on Wednesday (13th) related to its dispute with interiors supplier Clark-Cutler McDermott (CCM).

According to a report in The Wall Street Journal (WSJ) published on Monday (11th), GM was trying to get equipment and inventory from CCM following the supplier’s filing for Chapter 11 bankruptcy protection last week. On Wednesday it won court approval to do that with immediate effect. A GM spokesperson told Automotive Logistics: "We have reached a settlement with CCM and do not anticipate any disruptions to our supply chain or business."

He went on to confirm that following the court hearing, GM would obtain immediate access to CCM's facilities to remove GM tooling, and to purchase and take possession of its inventory of finished goods.

CCM supplies interior trim components and insulation, including dash, floor and pillar insulators, and wheelhouse liners. The majority of its business is in noise, vibration and harshness (NVH) abatement panels. It reportedly makes 175 parts for GM and is dependent on the carmaker for more than 80% of its revenue.

The supplier is blaming its bankruptcy on a contract with GM it says has drained it of $30,000 a day since 2013, according to the WSJ report. In response, GM's spokesperson said: "GM believes the primary cause for CCM’s financial distress relates to operational inefficiencies and management decisions." Following the hearing, CCM will now reject GM contracts.

IHS Supplier Business has reported that GM started having issues with CCM earlier this year when the supplier notified it of a loan default. CCM said it would have to shut down immediately if it did not receive emergency funds, according to the analyst, whereupon GM provided secure loans from March. IHS Supplier Business said that negotiations subsequently broke down.

GM was faced with a possible shutdown all of its assembly sites across North America that would have involved “tens of millions of dollars in losses”, according to the WSJ report, which quoted GM lawyers. The lawyers were reported as adding that the carmaker would “suffer immeasurable and irreparable injury to its goodwill and reputation, in addition to the significant disruption to the North American supply chain”.

That problem now seems to have been averted but what the sudden threat to GM from a favoured supplier reveals is how risky sourcing from a single supplier is to a major carmaker.

The GM spokesperson said that in addition to the retrieval of its tooling and materials it had now identified new partners to take over from CCM and mitigate any risk to the overall business.

CCM was tapped as one of the 110 best GM suppliers in 2016 – not the first time it has been recognised in the awards. The company has three manufacturing facilities on its single 23,300 sq.m campus in Franklin, Massachusetts, plus locations in North Carolina and Michigan.