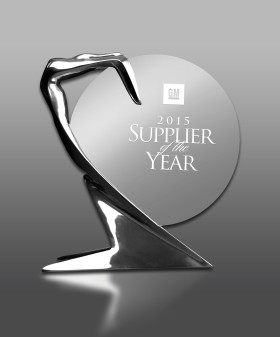 At its 24th Supplier of the Year awards, General Motors recognised 12 logistics providers in its list of 110 companies that have gone “above and beyond GM’s requirements” in providing services through 2015. The award ceremony was held at the Cobo Center in Detroit, Michigan.

The number of companies recognised for services in 2015 increased by almost 40% compared to the 79 recipients last year. More than half of the suppliers were repeat winners from 2014.

“Our priorities are focused on building positive supplier relationships, bringing new, customer-centric innovations to GM, and being the OEM of choice among suppliers,” said Steve Kiefer, GM vice-president, global purchasing and supply chain. “The companies we recognise tonight not only have brought innovation, they delivered it with the quality our customers deserve.”

Among the 12 logistics providers awarded were 4flow, which has worked as a fourth party logistics provider (4PL) with GM to establish a transport control centre for aftersales. 4flow manages all transport planning and execution from the centre using its integrated transport management software.

“We are very proud to be recognised by our client General Motors,” said 4flow’s CEO, Dr Stefan Wolff. “It is further proof that our innovative and independent 4PL services are an optimal solution for efficient global supply chain management.”

Danish logistics provider, DSV, also received an award for its support to GM. “We are very pleased to be GM supplier of the year for the third time,” said Jens Bjørn Andersen, CEO of DSV. “Our teams deliver great service to the GM supply chain every day of the year and we are always looking to improve even further. It is the dedication and customer focus being shown by our talented people all over the world that wins us these awards, and that is a source of immense pride for us.”

On the outbound side, UK-based finished vehicle carrier, ECM (Vehicle Delivery Service) also received an award for sustained operational excellence and support. Ray MacDowall, the company’s founder and chairman, said being selected for one of GM’s global supplier awards was a very special event and a rewarding tribute to ECM’s employees.

“What makes the GM global supplier of the year award very special is that it is very rarely awarded to an overland car carrier, and this is the fourth time in seven years that ECM has won the award,” said MacDowall.

ECM was recognised for its support of GM’s growth during a period of shortened transport capacity.

“In light of current market conditions, as capacity issues have become a major problem for manufacturers, a much greater value is being placed upon a carrier’s ability to manage market dynamics and maintain service levels by flexing capacity to suit market fluctuations,” explained MacDowall. “ECM’s unique fleet management systems and network is best positioned to respond to market fluctuations, and more and more manufacturers are now recognising the real value of reliability of service against the cost of service failures, and the risk that poses of lost sales and dissatisfied customers.”

The logistics providers included in the list of 110 suppliers were as follows: