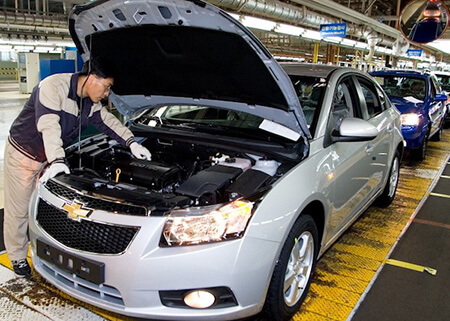 GM has revealed it is to invest $2.8 billion in two new global vehicle programmes for local and export markets in South Korea over the next decade as part of a plan to return its struggling division there to profitability.

GM Korea plans to make a small SUV next year and a “CUV-type vehicle”, under the Chevrolet brand, from 2022. At full production the carmaker said it would be making 500,000 vehicle units a year. It also has plans to make a small three-cylinder petrol engine for next-generation global vehicles there.

Exports will be particularly important for GM Korea. Last year, it exported around 75% of total production, supplying 392,170 vehicles to markets including Australia, Uzbekistan and Indonesia; during the same period, it sold almost 132,377 units in South Korea.

Those sales were down on previous years, however, and left GM Korea posting a net loss for 2017 of $1.1 billion – the fourth year of losses in a row. Earlier this year, GM Korea was considering bankruptcy proceedings.

GM Korea’s export sales have been falling since its parent decided in 2013 to stop distributing the Chevrolet brand in Western Europe by the end of 2015. The majority of European Chevrolet models were shipped from South Korea.

In February, GM Korea said it would close its Gunsan plant at the end of May following three years in which it had been running at just 20% of its capacity. The OEM confirmed this week that the plant would close at the end of the month. GM Korea also operates vehicle assembly plants are at Bupyeong and Changwon, and makes transmission and engine parts at Boryeong.

In February, Barry Engle, GM executive vice-president and president of GM International, said the division was at a critical juncture in terms of the future of its products and had to demonstrate significant progress.

Last week, by contrast, Engle said GM was very excited about its future in Korea following a breakthrough agreement between the division’s two main shareholders – the Korea Development Bank (KDB), which has a 17% stake in the carmaker, and General Motors, which has a 77% stake (China’s SAIC Motor also has a minority share). GM and the KDB have agreed on a balance sheet restructuring that will allow GM Korea to reduce existing debt by approximately $2.8 billion.

“Together with the KDB, the Korean Government, the labour union and our supplier partners, we have created all of the building blocks for executing a long-term viability plan that will be good for our people, good for our company and good for Korea,” said Engle.

However, uncertainty over the future of GM Korea has led temporary workers to call for better job security, as a number of them did on Monday (May 14) by forcing their way into a press conference being held at the Incheon plant to announce the profitability plan. GM Korea subsequently cancelled the briefing.