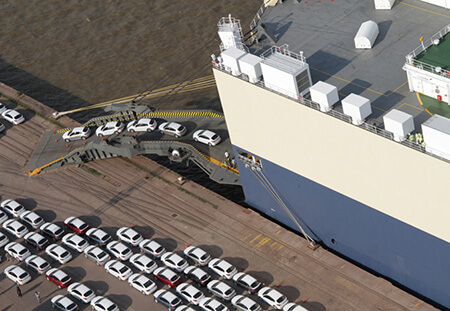 General Motors (GM) is working on plans to increase imports and exports of cars through the port of Rosario in Santa Fe, Argentina, following a successful trial late last year.

During the trial, the carmaker imported 1,162 Chevrolets, comprising Onix, its sedan variant, and Prisma from Brazil, as well as the Mexico-made Tracker, according to the independent blog, GM Authority. After passing through Rosario, the vehicles were transported to GM’s plant in the nearby town of Alvear.

The test run was performed in partnership with port operator TPR to determine how to expand operations and make them more efficient for both parties.

“We are very happy with the results of this operation, which involved a high volume of vehicles to disembark and move to our factory’s lot,” Fabián Silva, the company’s regional logistics manager, was quoted as saying by GM Authority. “We are interested in accelerating the embarkation and disembarkation processes in this port in the face of the new investments we are announcing, which will require high-volume operations in the coming years.”

Last October, GM announced a $500m investment at Alvear to develop manufacturing facilities for a new Chevrolet-branded model, expected to roll off the assembly lines from 2020. The US carmaker will meet $300m of the capital expenditure, with the rest coming from its supplier network.

At the time, GM said the plans included increasing operations at TPR to an annual container volume of 12,000 and import-export of vehicles totalling more than 100,000 units. The current numbers are about 6,000 and 1,500 respectively.

Last year, the port almost trebled its handling capacity of containers to 150,000 TEUs. According to a TPR press release last August, GM was importing between 200 and 300 vehicles a month through the port and studying the idea of exporting from the Alvear plant via Rosario.

Silva was quoted as saying that companies the size of GM think deeply when making strategic decisions, such as those concerning logistics routes, because of the high demands that will be made on suppliers.

One limitation in working through Rosario, which is an inland port, he added, is having to wait for ships to arrive, which has a negative effect on the cost of inventories that must be compensated for by improvements in other areas.