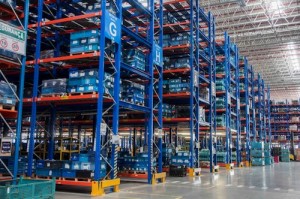 General Motors has opened a 30,000 sq.m logistics centre at its Brazilian industrial complex in Sao Caetano do Sul for the sequenced delivery of parts to its nearby assembly plant. The inauguration of the facility, which saw an investment of R$100m ($35m), coincided with celebrations for the 90th anniversary of GM do Brasil.

The company said the facility – called MASC (Logistics Centre Receiving and Sequencing Production Materials) – will process around 1.4m parts a day for delivery to the plant, which makes five of the 11 Chevrolet models sold in Brazil, including the Cruze, Cobalt and Spin. It has twice the storage capacity of the company’s previous facility and has a new materials management system that the company said would serve as a model for future such facilities worldwide.

Compared to the previous facility GM has also cut energy consumption at the plant by 60% through the use of such technologies as thermal translucent walls and a prismatic domed roof.

“Managing the inventory of parts and uninterrupted supply to the line is one of the key processes in the manufacturing of cars and reflects directly on their costs,” said Santiago Chamorro, president of GM Brazil. “A car has thousands of parts and each has a distinct inventory flow due to various specifications, such as place of origin, replacement interval and even size.”

Production throughput at the Brazilian plant is around one car per minute.

Governor Geraldo Alckmin participated in the ceremony to celebrate the 90th anniversary of General Motors do Brasil and spoke about plans to increase exports.

“We should prepare to increase exports, and that is why the cloverleaf interchange of Anchieta and the extension of Cônego Domenico Rangoni, with access to the port of Santos, are already completed,” he said. “Tamoios highway duplicated up to Alto da Serra and the road of Caraguá to the port of São Sebastião are under construction. We are preparing for a recovery in exports with the improvement in exchange rates and then we will be able to go further,” he added.

GM has been manufacturing and selling vehicles under the Chevrolet brand in Brazil for 89 years. In 2014, it sold almost 579,000 vehicles in the country. The carmaker has three facilities that produce vehicles: in São Caetano do Sul and São José dos Campos, both in São Paulo; and in Gravataí. These are in addition to a number of component and technology facilities, as well as the Chevrolet Logistics Centre in Sorocaba.