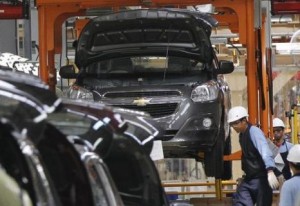 General Motors has said it will close its Bekasi plant in Indonesia by the end of June this year citing high material costs and limitations on its ability to fully utilise the local supplier base. The company’s executive vice president and president for GM International, Stefan Jacoby, also said that the logistics supporting production of the Chevrolet Spin at the Bekasi plant was “too complex”.

“Limited volumes meant that we were unable to use more fully localised components,” a spokesperson explained to Automotive Logistics this week. “More than 80% of the suppliers of components for Spin produced in Indonesia are located outside of the country, presenting logistic and financial challenges for manufacturing.”

Earlier, in comments made to the Reuters news agency, Jacoby said that GM could not ramp up Spin production to boost the volume as it had expected because the logistics chain was too complex.  “[We] had low volume so we could not localise the car accordingly, and from the cost point of view we were just not competitive.”

The Bekasi plant, 16km east of Jakarta, was running at less than a quarter of its annual capacity last year. It sold just more than 8,400 Spin units in Indonesia and exported 3,000. Heavy competition from Japanese brands, including Toyota, has been cited as another factor in GM’s decision to stop production.

The plant, which is wholly owned by GM Indonesia, was originally opened in 1995 but suspended production in 2005, opening again in May 2013. GM invested $150m in the plant, which makes the Chevrolet Spin for Indonesia and other ASEAN markets. The closure of the plant will mean the loss of 500 jobs.

GM will now operate as a national sales company only and import Chevrolet SUVs such as the Orlando, Captiva and Trailblazer for sale through its dealer network. Asked what the switch to supplying the market with imported vehicles would mean for GM's inbound transport services and where the vehicles would be coming from the spokesperson said that carmaker was still working with its dealers and suppliers on adjusting the structure of the national sales company.

GM Indonesia’s president Michael Dunne left the company at the end of February to start his own business, according to the carmaker. GM Indonesia chief financial officer Pranav Bhatt will serve as interim president until the permanent replacement is named. The carmaker said it had chosen a new executive to lead the national sales company, who will be announced shortly.

GM is also going to be present in Indonesia as part of its joint venture with Chinese carmakers SAIC Motor and Wuling – SAIC-GM-Wuling – when they begin manufacturing the Wuling brand in a new facility near Jakarta. Construction on that facility is beginning this year.

In other news, unconfirmed rumours suggest that GM is reducing production at its North American plants in Lake Orion, Michigan and Oshawa in Ontario over the next couple of months because of high inventory levels at its dealerships. A spokesperson for the company said that GM did not share production scheduling information and would “adjust schedules to meet market demand as a normal course of business”.