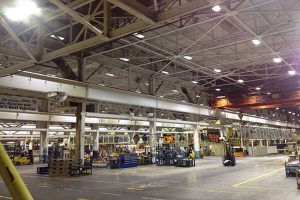 GM has announced it will close three of its North American assembly plants next year along with two transmission plants, resulting in the loss of over 14,000 jobs. It also has plans to shut two additional plants outside North America by the end of 2019, following this year’s closure of the Gunsan plant in South Korea.

The carmaker said the decision had been made in response to “changing customer preferences in the US and market-related volume declines in cars”. It said the move would save it $6 billion by the end of 2020, including cost reductions of $4.5 billion and a lower capital expenditure rate of around $1.5 billion.

“The actions we are taking today continue our transformation to be highly agile, resilient and profitable, while giving us the flexibility to invest in the future,” said GM chairman and CEO Mary Barra. “We recognise the need to stay in front of changing market conditions and customer preferences to position our company for long-term success.”

The vehicle assembly sites closing are the Oshawa plant in Canada, as well as the Detroit-Hamtramck plant in Michigan and the Lordstown plant (pictured) in Warren, Ohio, in the USA. These all make smaller passenger cars or sedans, including Chevrolet products such as the Cruze, Impala and Volt.

US goes largeCustomer preference in the US over the last few years has been for the bigger pickups and SUVs, and there has been a dramatic drop in sales of smaller vehicles. Figures from PwC Autofacts show that light trucks now make up 70% of sales in the US, compared to 30% sedans – not what was forecast under the previous government in the US, which suggested sales of sedans were likely to increase (the share was roughly 50:50 back in 2012).

That has a lot to do with falling oil prices in the US and the revisions to fuel economy standards brought in by the Trump administration. The US government is proposing a standard based on freezing emission and fuel economy assumptions from the 2020 model year. The Trump administration estimates the number will work out to around 37mpg, give or take 10mpg, according to PwC.

At the same time, however, the tariffs imposed by the Trump administration on material imports have pushed up production costs for carmakers. GM cut its profit forecast earlier this year because of the rise in the cost of steel thanks to the 25% duty imposed on imports of it by Trump. Ford has similarly commented on the impact of steel costs on its business, with its head of global operations, Joe Hinrichs, stating last month that they were higher than anywhere else in the world.

As revealed in a recent survey by the OFII, the Trump Administration’s trade policies are generating significant concerns for international companies with major operations in the US. Furthermore, a US Senate Finance Committee hearing in Washington, DC, in the same month heard that duties on vehicles and automotive parts entering the US, as proposed by the Trump administration, were putting investment and jobs at risk.

In response to GM’s decision to close plants this week, President Trump tweeted that he was looking to cut GM subsidies for electric vehicles, which would hit the consumer and impact on demand. Consumers who buy electric vehicles are eligible for federal tax credit but a change to the law would not just affect GM.

GM said it was investing in a switch to what it called more “highly efficient vehicle architectures”, especially in the light trucks, crossovers and pickups it makes. The company said it intended to prioritise investments in next-generation battery-electric vehicles.

In a statement, it said that “as the current vehicle portfolio is optimised, it is expected that more than 75% of GM’s global sales volume will come from five vehicle architectures by early next decade”. That, too, is expected to have a significant impact on the production and supplier base, as well as the flow and type of parts into its plants.

The impact on the supply chain of the closures and the big changes it has planned for the sort of cars it makes will be wide-ranging, though it is still too early to get an accurate view of exactly what this will mean in terms of the number and distribution of suppliers.

Asked what the closure of the plants and the shift to new vehicle architecture would mean for the size and make-up of its supplier base, a GM spokesperson would only say that “the global automotive supply chain was very complex”.

“We need time to assess the full impact of today’s news and will continue to work with our supplier partners through the transition,” the spokesperson told Automotive Logistics.