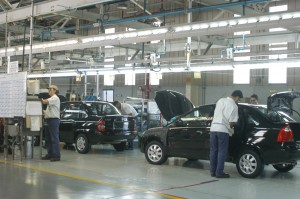 General Motors has confirmed it will stop production at its plant in Argentina for four days this month because of low demand from Brazil, which is GM Argentina’s biggest export market, and the biggest vehicle export market for the country as a whole.

GM makes the Chevrolet Classic model for export to Brazil at its plant in Rosario. It would not disclose the number of vehicles usually produced at the plant over the four-day period or by how much exports from Argentina to Brazil had dropped in 2015, only offering the ambiguous statement that “export volume dropped in line with the segments we participate”.

According to the Argentine association of vehicle makers – ADEFA – overall vehicle exports from the country to Brazil have fallen by almost 51,300 units in the first seven months of this year to 120,616 units.

Over the same period, for total exports there was a decline from Argentina of more than 21% compared with the same period in 2014, with a subtotal for the year of 154,123 vehicles exported compared with 195,460 for the first seven months of 2015. That said, the rate of decline per month for those seven months has been dropping since April this year, which showed a steep drop of almost 35% to 21,232 for the month. July showed a 9.4% relative decline based on the same month in the previous year.

Annual figures from ADEFA show that vehicle exports from Argentina were down almost 75,500 in 2014 on the previous year to just below 348,000.