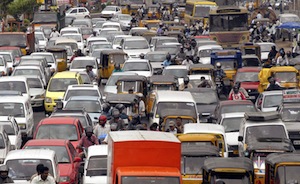 More than half the delegates canvassed at last week’s Automotive Logistics India conference, held in Pune, thought that government inaction was one of the main problems facing the progress of the automotive logistics industry in the country and would be until elections in India were completed in 2014. Speakers and delegates blamed the government for failures to invest in infrastructure, simplify regulations as well as to stimulate a flagging market.

Participating in a live survey during the event, 59% of voters said government inaction was the biggest challenge facing the country for automotive logistics. When asked what action the government should priotise, 68% said that it should focus on infrastructure. The second largest response (24%) was to implement the 'Goods and Service Tax' (GST), which would eliminate much of the complex web of state and inter-state taxes that must be paid when shipping goods around India.

India's automotive industry has gone into reverse this year following a decade of growth. The government has been widely criticised for failing to invest or facilitate private spending on infrastructure, as well as its inability to redress fiscal imbalances. Policies that had been seen to help industry be more efficient, such as the GST, have seen little progress despite years of promises. Meanwhile, inflation remains high in the country with rising energy and fuel prices, while the high interest rates intended to tame inflation hurting consumption.

“Earlier forecasts had been expecting some sort of stimulus measures from the government to encourage sales, but now we don’t expect anything to happen for the next for four months or so,” said Rajiv Bajaj from Roland Berger Strategy Consultants.

WWL's head of India, Gur Prasad Kohli, also said that despite promises last year by India's prime minister, Manmohan Singh, that the country would implement the GST by 2014, further clarity on the policy is very unlikely until after the elections.

Logistics and transport providers are demanding a wholesale revitalisation of the logistics infrastructure across the country. While poor roads, rail and port hurt the domestic sector, speakers pointed out that it is also holding back competitiveness in one of the few areas where India's automotive market is growing: vehicle exports. According to Achal Paliwal, head of logistics at Honda Car India, it is not uncommon for lead time of up to nine days to reach some of India’s biggest and busiest ports. Jitendra Goyal, deputy general manager for production control and logistics for Toyota Kirloskar, added that drivers will then often wait 48 hours at a port for vehicles to clear customs.

India's vehicle exports have grown about 10% so far in the first six months of the currenty financial year, and could approach 600,000 units. Carmakers including Nissan, Toyota, Volkswagen and Ford are all planning to increase shipments from India, which is becoming something of a hub for small car production. "India has a geographically advantageous position and is serving both developed and a number of emergin markets,” Bajaj said.

However, growth could be restrained by poor infrastructure and a failure on the part of the government to tackle bureaucracy and and high fees. Paliwal pointed out that while infrastructure is better at private ports, the fees are higher. The GST reforms are also expected to remove certain export costs, but delays are again preventing such improvements.

There are other areas in which speakers also looked to see improvements from government, incluidng non-standard truck lengths, as well as poor driver conditions and training. The government has been invovled here through subsidied groups such the Automotive Skills Development Council (ASDC). Alke Pande, an advisor for the ASDC, said that the association offered training for drivers in emergency handling and fuel-saving skills, as well as in handling new technological systems.

The lack of rail freight services in India has long been an issue as well, although there have been some positive steps in the last year, including a policy revision that has paved the way for better rail wagon designs and more privately operated wagon fleets. (Read more here.)

It is so far unclear what election results might mean for the automotive industry. Earlier this week, the Times of India reported that the country’s finance minister, P. Chidambaram, believes India will not get a government with “solid majority” after the election. The country's Congress Party, which has ruled India for much of the past 60 years, could be ousted. Citing Chidambaram the report said that the country is currently experiencing the “weakest point” in its democracy. “The executive has been hindered or hampered by over reach of our institutions, Parliament is nearly totally paralyzed and there is a mistaken, romantic view that there is a judicial solutions to our problems,” Chidambaram is quoted as saying.

One of the current favourites to head a new coalition government is Narendra Modi, head of the BJP, who is currently head of Gujarat state, which has attracted considerable automotive investment in the past five years.