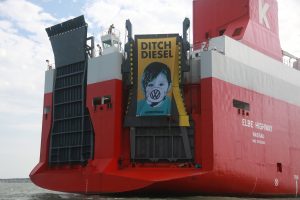 Greenpeace activists have boarded a ro-ro vessel in the UK’s Thames Estuary carrying Volkswagen diesel-engine passenger vehicles for the UK.

A group of 25 volunteers in kayaks and boats surrounded the 23,000 tonne ship owned by K-Line’s European short-sea subsidiary, KESS, and attempted to stop the Volkswagen cars from entering the UK.

It is understood another group of people entered the Sheerness port's import park in Kent and removed thousands of keys from cars to immobilise them.

A Greenpeace spokesman told the BBC that two people who had gained access to the ship had been detained, along with a third activist. The activists lifted the bonnets of vehicles and used stickers to label the engines with messages calling on VW to ‘ditch diesel’.

The vessel left Sheerness without offloading the cars and anchored off Margate, according to the BBC, which cited Volkswagen. The plan was to return the next day.

Peel Ports, which owns Sheerness, confirmed that protestors had accessed secure areas within the port, saying: “These areas are restricted to ensure that UK border security is preserved and we protect the safety of our customers and employees working on the port.

“We are working with the police, Greenpeace and Volkswagen to resolve the situation," it added. "The safety of the protesters and employees, whilst safeguarding the marine environment, remains our principal priority.”

The Volkswagen emissions scandal began in 2015 when the US Environmental Protection Agency sent a notice of violation of the clean air act to the German carmaker, after it was found that emissions controls in certain of its diesel-engined cars were programmed to be active only during actual emissions testing.

In January 2017, Volkswagen agreed to plead guilty to criminal charges and in April this year, a US federal judge ordered it to pay a $2.8 billion criminal fine. Since the event, other investigations have been initiated around the world involving VW and other carmakers.

In a statement cited by various media at the time of the protest, a VW spokesperson highlighted that the ship was carrying petrol, diesel and plug-in hybrid models.

“The diesel vehicles, which are the subject of the protest, meet strict Euro-6 standards,” added the spokesperson.