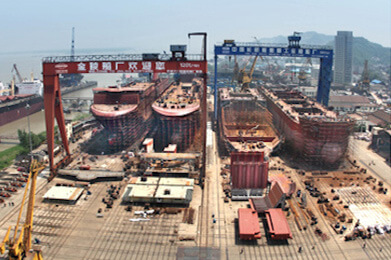 Shipper Grimaldi Group is to add six hybrid ro-ro vessels to enlarge and modernise its fleet. The order, valued at more than $400m, has been awarded to Chinese shipbuilder Jinling.

The vessels, delivery of which is expected to start in 2020, will be able to transport more than 7,800 linear metres of rolling units – the equivalent of about 500 trailers. That is double the capacity of the largest vessels currently operated by the Italian shipping line and triple that of the previous generation of ro-ro ships.

The hybrid vessels will use fossil fuel during navigation and electricity while in port, producing zero emissions when berthed, thanks to mega-lithium batteries which will be recharged during navigation.

“It is the first time in the world that such powerful batteries, equivalent to those equipping 90 Tesla cars, will be installed on ships,” said Grimaldi’s co-managing director, Diego Pacella.

At any given speed, the new ships will consume the same quantity of fuel as the previous generation of smaller ro-ro vessels, resulting in a 100% increase in efficiency in terms of consumption per tonne of freight transported.

Three of the Jinling-built ships will be operated by Grimaldi Lines in the Mediterranean while the other three, which will be ice-class, will be purchased by the group’s sister company Finnlines and deployed in the Baltic Sea.

At the start of the year, Jinling handed over pure car and truck carrier Grande Halifax to Grimaldi, the last of three vessels in a previous order with the Chinese company.