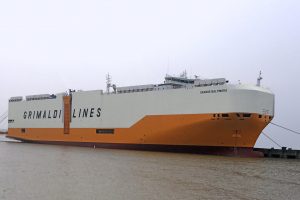 Italian shipping line Grimaldi has bought out its agent at the port of Savona in Italy, Marittima Spedizioni, for an undisclosed sum. The move puts Grimaldi in direct control of Savona Auto Terminal at the port.

A spokesperson for Grimaldi confirmed that the terminal had an area of 120,000 sq.m for handling and storing vehicles, of which 10,000 sq.m were under cover. It offers sufficient storage for more than 6,000 vehicles and can process 250,000 vehicles a year.

Work on a multi-level storage facility on the Darsena Alti Fondali dock at Savona began in September last year, following an investment by Marittima Spedizioni of more than €9m ($10.1m). It will eventually provide 8,500 sq.m of multi-level covered storage.

Last year, Grimaldi set up a service between Italy and Mexico dedicated to carrying vehicles, rolling freight and project cargo, which calls at Savona and Civitavecchia, also in Italy.

The service connects the Italian ports of Civitavecchia and Savona with the port of Veracruz in Mexico. It will run via Turkey’s port of Gemlik and ports in North America, including the port of Halifax in Canada and the US ports of New York and New Jersey, Baltimore, Jacksonville and Houston.