Growth and compromise for Yusen Logistics

Japan’s Yusen Logistics has been expanding its services to carmakers and tier suppliers, particularly in the UK, with the use of strategic crossdocks, as well as investments in IT. But to implement innovations, the provider points to the need for compromise. 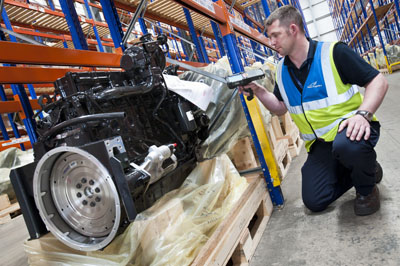 It has been about two years since Yusen Logistics was formed from the consolidation of the NYK Group’s air freight and freight forwarding business, Yusen Air and Sea Services, with the NYK Logistics division. The decision was taken “to establish a structure capable of fully serving all logistics needs of its customers,” according to NYK Group’s president Yasumi Kudo. That’s a lofty aim for any logistics company, and few would ever suggest that they aren’t aiming to do just the same.

Since that time, however, Yusen has been able to make real progress in adapting more complex supply chain solutions to a number of automotive clients, particularly in the UK. It has implemented a number of strategic crossdocks, for example, that integrate collection, sequencing and subassembly services for global, European and UK-based suppliers. The company has also been investing in a number of IT systems, including a strong move away from paper-based documentation.
In this story...

With UK automotive sales, production and exports all on the rise, the country has been a centre focus for Yusen’s European operations, where the logistics providers is supporting Bentley, Jaguar Land Rover, Honda, Nissan, Toyota and construction equipment manufacturer JCB through contracts with some of their key tier suppliers.

Yusen has 20 depots across the country providing warehousing and crossdock services, with six of those operating as core automotive sites: Glasgow, Manchester, Leeds, Tamworth, Marston Gate and Avonmouth.

At Tamworth, a 7,500-square-metre facility in the Midlands, Britain’s historic automotive manufacturing region, activity has grown in line with the country’s automotive revival. The surge in automotive investment in the region has brought requests to Yusen from first and second tier suppliers for model specific decanting, crossdocking, stockholding and sequencing operations.

“We have benefitted from all of the OEMs in terms of their fairly strong volumes and the supplier base, particularly in this region,” confirms John Pursey, business unit director for Yusen Logistics (UK).

Jaguar Land Rover has been especially important for business at Tamworth. The centre has become an important hub for UK and European-based tier suppliers serving JLR’s Castle Bromwich plant, for example, which is just 20km away and makes the Jaguar XF, XK, XJ and F-Type models.

More than a crossdock

Yusen can point to a diversity of services beyond crossdocking and part sorting at Tamworth, including a number of sequencing and subassembly operations. For JLR, Yusen provides inventory stockholding from which it picks in sequence for subassembly and then delivers directly to the Castle Bromwich assembly line.

The logistics provider collects mirrors from SMR Automotive Mirrors UK, based in Portchester, and provides quality inspection prior to subassembly, linefeed preparation and sequencing. The mirrors are packaged and labelled before delivery four times a day for fitment to the Jaguar XK and new F-Type. 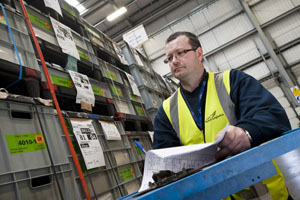 The Tamworth facility also provides sequencing and linefeed preparation for car mats installed in the same models, which are supplied by Poland’s Visscher Caravelle. Furthermore, the company is handling the sequencing of spoilers and boot lids supplied by Portuguese manufacturer Inapal Plásticos, as well as handling wiring harnesses from Morocco and Turkey for quality checking, sequencing and onward delivery to a number of OEMs.

Nor is JLR the only carmaker served by Tamworth. Yusen handles regional collections north to Nissan’s plant in Sunderland and south to Honda’s plant in Swindon, illustrating the facility’s strategic location for services around the UK.

“Where we have those UK-collect suppliers we base vehicles here for the collections,” says Pursey. “We trunk those up to Leeds where we will then consolidate loads and go up to Sunderland, where we have a drop-trailer system.”

Pursey says that with the pressures OEMs face in reducing total delivered cost and looking for ways to lower supply chain costs, there is a constant demand for supply chain agility. “We continue looking at new solutions and, either through Tamworth or through a number of our network depots, we move vehicles around depending on what is the most efficient way of doing those collections.”

Yusen has also developed a tracking technology, called Vision-i, with a software provider, which allows it to track its European haulier partners. It is currently employed for its pharmaceutical business but is something it is now looking to introduce for automotive clients.

“It is a middleware that can read different GPS provider information and through unique coding, we can monitor routes on behalf of our customers,” says Pursey. “Within the UK we have some advanced IT systems that can give us tracking of our own vehicles in real-time that allows us to manage by exception.”

Previously in the automotive sector, the tracking of movements was based on recording and reporting on everything, but the system has changed and Yusen reports to customers by exception only, something that has allowed it to better manage the allocation of both its own and its customers’ resources.

“What we are now doing is rolling that out to have the same functionality across Europe,” says Pursey. “Through the coding we can track the movements from A to B for all our customers and provide them with real-time information.” 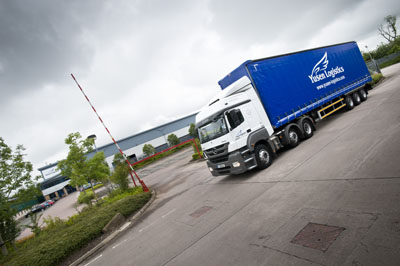 According to Pursey, the Japanese logistics provider has put considerable efforts into developing and employing new IT systems. He suggests that this success has come from some of the functionality the company has in other sectors, such as for white goods, and in having such technology as handhelds devices that enable drivers to scan documents on collection, take photographs and pass on information electronically.

“With handhelds you can also update documents, you’ve got visibility in terms of PODs [proof of delivery], whether it be temperatures recorded or customs documentation,” says Pursey. “It just makes the process far more efficient. We are slowly moving away from shuffling bits of paper around and drivers having to have filing cabinets in their cabs. The technology has certainly improved that side of the business.”

While IT solutions might have been borne out of other sectors, Pursey says that Yusen’s work in the automotive industry has also influenced what it does for the supply chains of other inudstries, not least the principles of leanness and continuous improvement, or kaizen.

“Most 3PLs involved with automotive have been doing lean and kaizen for many years – everyone has their own version,” admits Pursey.

Yusen has branded the kaizen principles that are part and parcel of the wider NYK group culture, developing them as a company excellence system and integrating them across all of its business sectors in a programme called YES, or the Yusen Excellence System.

“We have used [it] across all our sectors and have identified benefits,” says Pursey. “All of our customers are looking for gain-share opportunities and better or new ways of doing things.”

The programme, which was first introduced when Yusen Logistics was formed, is designed to standardise the communication of the company’s operational performance management and continuous improvement, building on the NYK Group’s values of “integrity, intensity and innovation”. 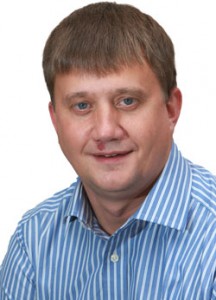 To date, around 800 UK personnel have been trained in YES from management through to workers, equating to about 1,500 hours of training, covering introduction to lean, performance management and kaizen improvement. All the company’s warehouse operations have implemented YES standards, with the aim of achieving the company’s standard for best in class.

The scheme is currently being introduced to transport operations, representing 65% of Yusen’s UK business, as well as its back office and central functions. The aim, says the company, is to apply the lean methodology for all elements of its business and eliminate non-value added processes and non-essential paperwork.

“YES tools are vital to enable Yusen to deliver continuous improvements in response to client cost reduction expectations, often resulting in a gain-share agreement to recognise delivered results,” says Pursey. “Contracts are set with kaizen targets based on operational maturity, which are reviewed at UK board level in delivery of service, safety, value and quality improvements on behalf of our customers.”

Better be ready to compromise

In today’s automotive industry, Pursey says that it is important for every one of its contracts to demonstrate that the company is creating new ideas.

The push for innovation by a logistics provider is important, given the complaints from many manufacturers that they don’t see enough of it. But Pursey sees it a bit differently, suggesting that compromise plays an essential role in introducing supply chain projects. For example, Yusen gets paid by the cube or tonnage, which Pursey says is to its benefit, but the company also has to demonstrate to manufacturers that it is collecting more volume while moving fewer miles.

"OEMs have the direct relationship with the supplier – so we make the suggestion and if it is something where people can see a real benefit, then an improvement initiative is kicked off”" - John Pursey, Yusen Logistics

While the automotive industry is regarded as leading edge in many ways when it comes to lean logistics, they tend to be based on solutions that the OEM wants – in other words, the carmakers are still engineering and deciding most things when engineering or designing a logistics network.

“Whenever we are planning collections and we can see a better way of supplying that volume through our IT systems, we will make those recommendations to the suppliers through the OEM,” Pursey says. “They have the direct relationship with the supplier – so we make the suggestion and if it is something where people can see a real benefit, then an improvement initiative is kicked off.”

For such a system to be effective, it’s important to have regular meetings with the OEMs that Yusen serves. Making compromises over cost savings is always on the table, Pursey admits.

“On occasions we have identified opportunities, but someone has to compromise to find the gain-share benefit for everyone,” he says. “Sometimes that is difficult for people to do because they want guarantee of service and protection of their own line-side delivery and network operation. It is hard, but if the prize is big enough, you normally find a solution.”