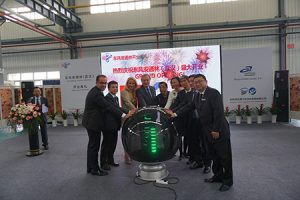 Interior component maker Grupo Antolin has opened an €11m ($12.4m) plant in Wuhan, China that is making headliners and door panels for Renault Nissan, PSA Group, Infiniti and Honda. The facility is a joint venture with Dongfeng Visteon and will mainly be making parts for DF Renault and DPCA (Dongfeng Peugeot-Citroën Automobile), which both have assembly plants in Wuhan.

The set-up of the facility in Wuhan means a much shorter inbound delivery time as parts were previously supplied from Groupo Antolin’s plant in Shanghai.

The new facility has the capacity to produce 250,000 components a year and will employ 125 people by the end of 2016, said Grupo Antolin.

The joint venture is working with local and international logistics providers for the delivery of components to its OEM customers, though Grupo Antolin would not confirm which providers these were.

DF Renault’s Wuhan plant, opened earlier this year and its first in China, includes a vehicle assembly plant, a powertrain plant and an R&D centre. It has an initial production capacity of 150,000 vehicles per year, with the potential to rise to twice this.

DPCA has three plants in Wuhan with a total potential capacity of 750,000 vehicles a year for the Dongfeng Peugeot and Dongfeng Citroën brands.