In the push to improve productivity, manufacturers and logistics providers are looking to increase the use of AGVs in parts and material warehouses, although there are still questions about investment and flexibility. 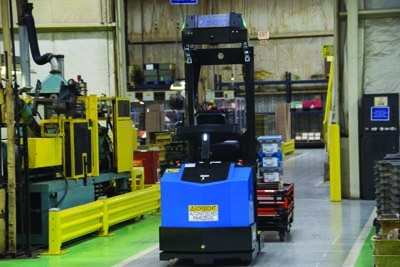 Automated Guided Vehicles (AGVs) are an increasingly common sight in the automotive industry, particularly in production plants, where they might be seen moving material along fixed routes or between different zones. They have been somewhat less common in parts and material warehouses, where variability is sometimes higher and there is a need for flexibility that has not always been well suited to automation. On top of that, if a parts warehouse is outsourced to a logistics provider on a 2-3 year contract, the provider may not be inclined to invest in expensive automation without knowing it can amortise the cost.

However, as the technology improves, many companies are looking more carefully at using AGVs and other forms of automation for automotive spare parts and material warehouses. At DHL, for example, AGVs are now seen as an increasingly integral part of the spare parts distribution processes. According to Fathi Tlatli, president of the global automotive sector at DHL Customer Solutions and Innovation, AGVs are frequently used to move large and trailing loads with a low-to-medium throughput over short-to-medium distances. Although AGVs may have diverse forms and functions, Tlatli highlights that they share the ability to carry goods autonomously following pre-defined or dynamic routes.

"Those systems are used in facilities such as production operations and parts distribution centres. Amongst other things, they contribute to limit heavy goods handling by operators and also ensure a safer environment," he says.

Not all AGVs are alike, and they are likely to have somewhat different uses depending on the plant or warehouse environment. According to Scott Kwilinski, director of solutions engineering at Michigan-based company Egemin Automation, AGVs are fundamentally 'mobile robots' that can be customised for many purposes. AGVs manufactured by Egemin are used to automate warehouses, with parts typically being received by a manual driver before being “inducted” into the warehouse system using either a floor location or an induction conveyor.

"The pallets or totes are then put away into racking or floor-stacked by an AGV. When the parts are needed, either for an assembly line or for shipment, the product is pulled by an AGV and delivered to the line or loaded directly onto a trailer for shipment," says Kwilinski.

Tim Chiocchio, lean project manager at Seegrid, which manufactures AGVs, says that the company’s equipment uses vision technology for navigation. "Vision-guided AGVs of this type are unique because no infrastructure is required, meaning that routes can be programmed and updated immediately by the operator without engineering or vendor resources, providing an affordable automation solution," he says.

"The ability to quickly walk or drive the vision-guided AGV through a new route or make changes to an existing route allows the facility flexibility to handle product flow and facility layout changes," he adds.

Coming to a shop floor near you

According to Chiocchio, Seegrid vision-guided AGVs are used by a variety of companies within the automotive industry, including a recent implementation at the New South Express consolidation centre for Honda Manufacturing of Alabama. Another example is Aisin, an automotive components and systems supplier, which uses vision-guided AGVs throughout its facility to improve productivity and efficiency and reduce operating costs. 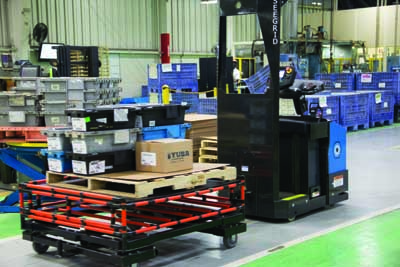 “AGV pallet trucks move product from manufacturing to shipping areas to the shipping staging-lanes, transport empty racks on carts to the manufacturing line, and bring finished product back to the finished-goods store," he adds.

Component and rubber supplier Yusa Corporation also decided to use vision-guided AGVs to improve the flow of raw materials to assembly lines and improve flow from assembly to the warehouse, according to Chiocchio. AGV pallet trucks transport finished components from packing stations, located at the end of manufacturing cells, to the warehouse for component shipping.

"Yusa has experienced a reduction in labour and maintenance costs with the use of vision-guided AGVs," he says.

Some of the most significant differences in AGVs are between those used in automotive assembly plants with those used in parts warehousing. According to Tlatli, DHL uses AGVs in vehicle assembly facilities to better manage line-feeding activities, which often include just-in-time (JIT) transport from plant inventory to the assembly line. In this context he says that the purpose of AGVs used in the manufacturing environment is to focus on replenishment of line-side stocks, meaning that they are usually operator-less vehicles conveying parts batches following fixed routes.

According to Kwilinski, AGVs used in spare parts distribution centres often have other functionalities, such as the capability to pick parts directly from the shelves. For him, AGVs of this type must be able to locate all the necessary items in the warehouse to prepare an order. In doing so, he points out that they are following flexible routes and should be able to reach a high picking frequency while ensuring parts accuracy.

"In warehousing, vehicles with fork attachments are typically used to handle totes,” he adds. “Delivery to the line is often done with ‘tuggers’ – vehicles that pull carts loaded with parts. The decision to use multiple vehicle types is an economic one. The tugger-style vehicles can move product far more efficiently than fork trucks, but can’t operate in a dense warehouse.”

"AGVs do not get distracted and are not bothered by other forklift operators or line operator requests. Forklifts are dangerous and serious forklift related injuries and deaths occur regularly, costing businesses on all fronts." - Tim Chiocchio, Seegrid

According to Egemin Automation’s Kwilinski, AGVs are able to offset labour costs significantly, with stable or declining investment costs. "The cost of AGVs has been steady and even drifting lower. As AGVs become mainstream, companies that do not exploit this technology will be at a disadvantage," he says.

For Chiocchio at Seegrid, such equipment allows companies to redeploy employees to more value-added areas of the plant, leaving repetitive transport to the AGVs. He adds that AGVs also do not require expensive training programmes, and help improve productivity, as there are fewer damages and delays as a result of unstable loads and poor transporting practices.

"When AGVs are used to move products, consistent and reliable transportation occurs,” insists Chiocchio. “AGVs do not get distracted and are not bothered by other forklift operators or line operator requests. Forklifts are dangerous and serious forklift related injuries and deaths occur regularly, costing businesses on all fronts."

Chiocchio also flags up the lean credentials of AGVs and their role in helping to eliminate wasteful processes. "For example, if a facility stores excess inventory on the floor, and trash, debris, and pallets are stored improperly, AGVs will be unable to provide the many advantages they deliver,” he points out. “A facility can improve their facility environment by keeping floors clean, and excess inventory stored in the appropriate locations.”

"The whole warehouse environment must be adapted in order for the AGV to work efficiently" - Fathi Tlatli, DHL Customer Solutions and Innovations

Tlatli agrees that a key advantage of using AGVs in a warehousing or in-plant context is their ability to help reduce labour needs and lower certain safety risks for heavier loads. However, Tlatli points out that AGVs can reduce flexibility in the case of an unexpected event. For example, while AGVS can help speed parts picking in warehouses, they lack flexibility when parts locations change, which is a constraint for spare parts movements.

While the costs of AGVs may be stable, however, the equipment nevertheless often requires high upfront investment costs. That includes not only the vehicles themselves but the cost of adapting plant environments, such as reconfiguring aisles, racks and adding other safety features. "The whole warehouse environment must be adapted in order for the AGV to work efficiently," he adds.

Moreover, in a kaizen-based continual improvement environment, Tlatli also warns that AGVs, unlike people, are incapable of raising improvement ideas or spotting mistakes. 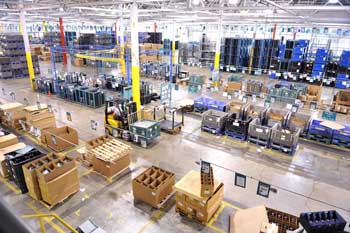 The use of AGVs can have other downsides as well. Professor Stephan Freichel, from the Cologne University of Applied Sciences, warns that potential users of AGVs should be aware that they sometimes add to existing operational problems.

"Usually AGVs are used to bridge certain distances where containers are internally transported between zones on a regular basis, [and where companies have] decided not to use other 'continuous mover' equipment or manned forklifts or trains," he says. "However, this type of equipment can end up being the bottleneck, [which is] why parts people tend to gain as much flexibility as possible and prepare for volatility, as well as cost and capital savings. Lots of part numbers and SKUs just sit there and pick rates are super low. For parts which have movement, other technologies are preferable.”

Despite some disadvantages, Tlatli is confident that the automotive industry is heading towards an increase in the use of AGVs in the future. Even so, he is unsure whether we'll ever see a completely 'operator free' warehouse in the automotive sector. For him, AGVs must still evolve to cope with the diversity of automotive parts and the need to simplify related IT systems; interfaces will also be a key challenge for companies keen on introducing AGVs in smaller facilities. "The automotive industry may, however, benefit from innovative projects implemented in other industries such as technology goods," he says.

More broadly speaking, Freichel says that there is an increasing variety of AGVs and new technology, including the Eisenmann 'self-guided rails' and ‘lifters’ that are used by Amazon to move racks.

"Here, new picking principles could take place; for example, for multi-order picking and 'goods to man' processes and so on,” says Tlatli. “For normal AGVs, the trend is to move away from wire guided to GPS and laser guided. I just saw these at the Deutz truck engine factory.” 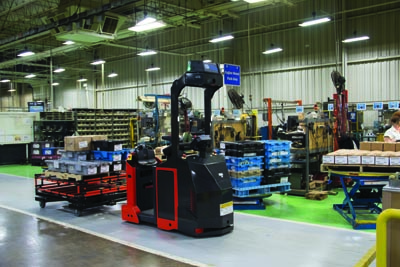 Chiocchio agrees that, with advances in technology advancements, AGVs are becoming more flexible and affordable. "The most recent innovation in AGVs is the availability of vision-guided AGVs in Europe,” he says. “Seegrid has been selling AGV solutions throughout North America successfully for many years and chose to launch the company’s AGV products in Europe at LogiMAT 2014.”

Meanwhile, Kwilinski foresees a number of developments that will hasten the use of automation in automotive warehouses. The integration of warehouse management systems with AGVs will make their use more seamless, he says. Furthermore, the capability of AGVs to interface with denser racking systems like flow racks and drive-in racks will allow existing facilities “to maintain density in the same footprint”. AGVs could also be further integrated with automated storage and retrieval systems, moving goods to and from the warehouse floor.

Questions still remain, particularly over returns on investments, IT communication and whether some warehouse tasks really need automating. However, taking into account labour costs, along with the fact that real estate warehouse value is on the up in many markets, the pressure on improving productivity is growing too. More logistics providers and manufacturers are thus looking at what works well in assembly plants and trying to adapt it elsewhere in the supply chain, with AGVs increasingly set in motion.