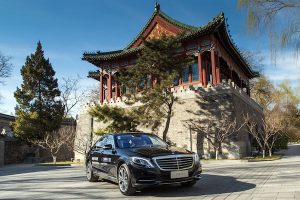 Increased Chinese import duties on US-made cars and other setbacks have forced Daimler to lower earnings expectations for this year, despite record sales.

“The decisive factor is that at Mercedes-Benz Cars fewer-than-expected SUV sales and higher-than-expected costs – not completely passed on to the customers – must be assumed because of increased import tariffs for US vehicles into the Chinese market,” the German group said in a statement to the financial markets.

From July 6 China will be levying 40% on of vehicles made in the US, up from the current tariff rate of 15%. The change is part of a wider trade war between the US and China.

“This effect cannot be fully compensated by the reallocation of vehicles to other markets,” Stuttgart-headquartered Daimler said.

The company sells the full range of its SUVs in China, while its US operations produce the GLS, GLE, GLE coupe exclusively for export.

When asked, a company spokeswoman declined to comment on the higher-than-expected costs, telling Automotive Logistics that was for competitive reasons.

The group also expects profits will suffer in the second half of this year from a new certification process, the worldwide harmonised light vehicles test procedure (WLTP). That is one of two pieces of European legislation intended to achieve more accurate monitoring of emissions from passenger cars.

Additionally, the group anticipates Mercedes-Benz Vans will continue to be affected by the ongoing recall of diesel vehicles, while Daimler Buses is being negatively impacted by declining demand in Latin America.

Consequently, Daimler is now predicting group earnings before interest and tax (EBIT) will be slightly below 2017’s level of €14.7 billion ($17.1m). It had previously expected it to be around the same as last year.

Yet Daimler has reported a new sales record for the first five months of the year with 349,119 Mercedes-Benz SUVs sold, a 11% rise on the year-ago period.