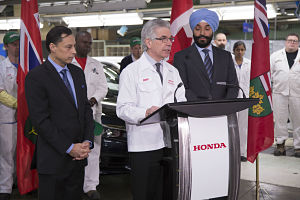 Honda Canada has agreed to invest C$492m ($374m) in new facilities in Ontario, securing 4,000 direct jobs, according to the province’s government.

Among the developments, the carmaker has agreed to build a new paint shop at its plant in Alliston that will reduce greenhouse gas emissions by 44%. It will also adopt new vehicle assembly technologies, including lightweight materials and advanced bonding techniques.

Additionally, research and development will take place there to support production of future vehicle models, including software upgrades and prototyping of new components.

Outside of the direct jobs protected under the deal, Ontario’s government believes thousands more have been secured in the province’s automotive supply chain.

Vehicle assembly and automotive parts production directly support more than 100,000 jobs in Ontario, as well as hundreds of thousands more spin-off jobs across the province.

There are five global car assembly operations there, run by Honda, Chrysler, Ford, General Motors and Toyota; as well as a truck manufacturing operation run by Hino (a division of Toyota).

Honda accounts for about 17% of the province’s vehicle output. In total the carmaker has the capacity to produce 400,000 Civic and CR-V models annually for the Canadian and North America markets, as well as for export. It also produces 260,000 four-cylinder engines annually.

In February last year, Honda altered its plans to have the plant in Alliston make CR-Vs for Europe. Instead, it said the Canadian plant would focus on North America, while Europe-destined CR-Vs would be supplied from Japan. The move was made to meet high demand for such models in North America, which had been experiencing record sales.

Duguid and the state’s premier, Kathleen Wynne, recently visited Honda’s headquarters in Tokyo as part of a broader business mission to Japan and South Korea.

The governments of Ontario and Canada are each providing Honda with conditional grants of up to C$41.8m. Honda will invest up to C$408.3m.

Honda’s Canada CEO, Jerry Chenkin (pictured, centre), said: “Thank you to both the Ontario and Federal governments for creating an environment which will allow us to further modernise our manufacturing facilities and make innovative upgrades possible.”