Honda’s Celaya plant out of action until mid-November

Damage caused by the flooding of Honda’s car assembly and engine plant in Celaya, Mexico, which happened at the end of June this year, has forced the carmaker to suspend production there until November. The company said that expert teams had completed an investigation of the damage to the tooling and equipment at the plant and repairs would take until then. 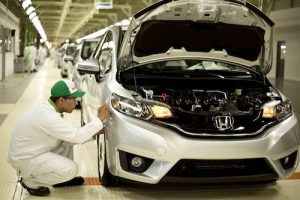 Celaya is the only Honda plant making the Fit, meaning no Fit models will be made until mid-November

“Our commitment is always to provide our customers with high quality products and production will not resume in Celaya until we can ensure the highest levels of quality for all parts and products,” said the company in a statement.

Celaya is currently the only plant making the Honda Fit, which means there will be four and half month shortfall in production of that model. Vehicle and component production was stopped at Celaya on June 28. The Celaya plant also makes the HR-V but that vehicle is also being supplied from Honda’s Guadalajara plant in Mexico.

In terms of part production, Celaya was also providing a transmission component for the Honda Insight made at the US plant in Indiana. While Indiana had enough inventory of that component to see it through July, production of that vehicle will be suspended through August, though a spokesperson for Honda North America said that production would begin in September despite the longer shutdown at Celaya because Honda could source the parts from its global manufacturing network, though it would not specify where.

Celaya has an annual production capacity of 200,000 cars and 350,000 transmissions. Honda opened the $800m plant in 2014. Volumes out of the plant are aimed at both the Mexican and US markets, with flexibility built into transport routes north, including rail and ocean.