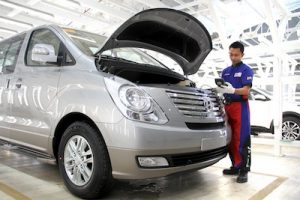 Hyundai’s local division in the Philippines – Hyundai Asia Resources – has opened a new multi-million dollar logistics and vehicle preparation centre at Calamba, in the Laguna province. The 10-hectare Hyundai Logistics Centre (HLC) will store both finished vehicles and parts, with capacity for 2,400 vehicles.

The company has emphasised the environmental credentials of the centre, which was designed by Mary Ann Arañas-Espina, founding member of the Green Architecture Movement.

According to the company the facility, which is built on the site of an old textile factory, complies with the standards of Philippine Green Building Initiative (PGBI), a group of professional development associations formed through the shared concern for the environment. It uses LED lighting that Hyundai claims has reduced energy consumption by more than 50% and also collects rainwater for use on siphoning, irrigation and other uses.

HLC has received a special certificate from PGBI for having implemented design standards equal to that of Kamagong, the highest distinction for eco-friendly buildings in the country.

The facility also features what Hyundai terms its Global Dealership Space Identity (GDSI) model showroom. GDSI is the new standard of Hyundai dealerships worldwide it said in a statement.

The company has further plans to a set up a training academy, build a 12-story office, a car museum and a centre for climate change.