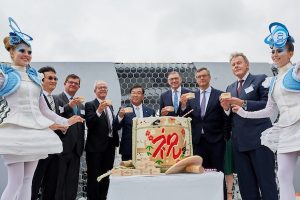 The new central gate building has operational and corporate departments, with five levels of 900 sq.m and houses 150 employees.

International Car Operators signed a concession agreement with the Port of Zeebrugge for a 54-hectare expansion of the Bastenaken car terminal earlier this year. The new terminal will have a surface of 200 hectares (totalling about 300 hectares in Zeebrugge) with a quay wall allowing up to 16 vessels to operate simultaneously.

This expansion will also aim at connecting the existing Hanze-terminal with the Bastenaken-terminal, enabling traffic arriving at the terminal to enter via the single newly constructed gate building located adjacent to the A11 motorway.

“Port of Zeebrugge is pinned on the world map as the largest car handling hub offering specialized knowhow,” said its managing director, Joachim Coens. “We owe our reputation to the high ambitions pursued by companies such as ICO and NYK.”

Alongside the company’s continued expansion, ICO’s managing director Marc Adriansens stated that the focus is also on creating a green terminal.

Flemmish minister for energy, Bart Tommelein, added: “As a large international car transport company, ICO will be able to use the green electricity in the future for loading electric vehicles and as shore-side electricity for cargo ships.”

ICO has expanded its car handling terminals up to 300 hectares in the port of Zeebrugge and provides services to 18 car manufacturers.