'Illusion and inadequate reactions' to blame for Humber collision 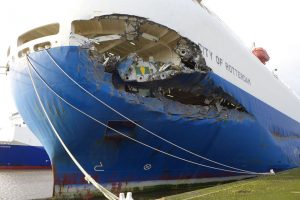 A ‘compelling illusion’ coupled with the slow reaction of the two vessels involved was behind the collision between the car carrier City of Rotterdam (pictured) and the ro-ro freight ferry Primula Seaways, the official investigation into the incident has concluded.

The City of Rotterdam, operated by Nissan Car Carriers and owned by Fairmont Shipping (Canada), collided with the DFDS vessel Primula Seaways in the Humber Estuary near Immingham port on the northeast coast of the UK in December 2015. Both were damaged but able to make it to Immingham port without assistance, and no injuries or pollution were reported.

In its report on the matter, the UK’s Marine Accident Investigation Branch (MAIB) said that the City of Rotterdam, which was outbound from Immingham, had been set to the northern side of the Bull Channel and into the path of inbound DFDS vessel. The pilot’s efforts to manoeuvre the ship to the south of the channel were ineffective because of “a relative motion illusion”, which meant that because of his position on the bridge at a starboard ‘off-axis’ window next to the VHF radio five minutes before the collision, he perceived the vessel to be heading in the direction in which he was looking.

“As it was dark, the inward slope of the window removed all objects in the periphery, and there were no visual clues, such as a forward structure or bow tip, the illusion would have been compelling,” said the MAIB report.

The report also stated, however, that intervention by the master aboard the City of Rotterdam came too late and that actions taken by the Primula Seaway’s bridge team and the Humber Vessel Traffic Service were “insufficiently robust”. The Primula Seaway did start to reduce speed two minutes before the collision but the report found that “a more substantial reduction in speed was warranted”.

The report also stated that the City of Rotterdam’s bridge team was over-reliant on the pilot and its lack of effective monitoring of the vessel’s progress was evidence of “ineffective bridge resource management”.

In its recommendation to Fairmont Shipping (Canada), the owner of the City of Rotterdam, the MAIB stated that it should take action to reduce the likelihood of distorted spatial awareness aboard the vessel and its sister vessel, City of St Petersberg. The report said it was important to emphasis the risk of spatial distortion on the bridge to the crew, especially when standing away from the centreline, and that there was a need to monitor the pilot’s actions at all times.

Fairmont Shipping has since introduced a number of measures designed to avoid future incidents including the installation of a bow tip marker on the centreline immediately ahead of the bridge window to provide a reference point from any position on the bridge. It has also posted notices warning of relative motion illusion and increased the length of the VHF handset wires aboard to enable its use from the forward centre position on the bridge.