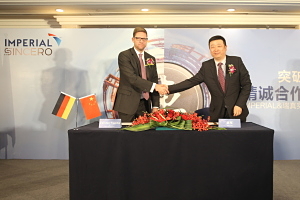 Imperial Logistics International has teamed up with Chinese conglomerate Sincero to offer integrated logistics services to carmakers in the country.

The two have created a Shanghai-based joint venture, which Imperial will own 51% of with Sincero holding the remainder.

Imperial has been operating in the Chinese market since 2012 through another subsidiary, Shanghai Imperial International Freight Forwarding Co.

Automobile logistics is the largest division within the Sincero group. Customers include Dongfeng, Honda, Nissan and PSA Group. Its services include vehicle, production and spare parts logistics. The company owns 11 regional distribution centres and an “extensive” fleet of vehicles, serving 327 cities in 32 provinces.

In a statement, Imperial said it would contribute “many years of excellent relations with German automobile manufacturers to the joint enterprise”.

Earlier this month, the company announced another contract with Audi to take care of internal factory logistics for vehicle assembly at the carmaker’s plant in Győr, Hungary.

“Imperial has been one of the market leaders in automobile logistics in Germany and in central and eastern Europe for many years, particularly in procurement and factory supply logistics,” it stated, adding that German automotive manufacturers currently had a market share of about 20% in China.

The country is also the largest sales market for German vehicle parts.