India conference: Somewhere behind the smog, the sun is rising 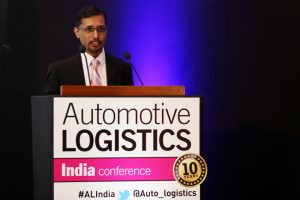 While the North American economy and automotive supply chain may have been thrown into disarray this week with the election victory of Donald Trump in the US, there was a clearer picture of the prospects for the Indian market, despite the record levels of obscuring smog in Delhi.

According to figures presented at the 10th Automotive Logistics India conference, held this week in Gurgaon, the country is heading towards becoming one of the world's top car-producing nations by 2020. But it will have plenty of logistics and supply chain challenges along the way.

After the market declines of 2013 and 2014 and relative stagnation in sales and production since then, India's passenger vehicle market is recovering well this year, with growth expected at 7.5% year-on-year against the global average of 2.2%, according to figures from analyst IHS Markit. From next year, expectations are that annual growth could reach double digits and stay there for the rest of the decade, according to Anil Sharma (pictured), principal analyst at the company.

Added to that is the fact that the component industry in India is heading for a turnover of $100 billion in 2020, up from $35 billion in 2014, according to Devendra Bharambe, deputy general manager of demand chain management at Mahindra & Mahindra.

There are several factors supporting this rate of recovery, said Sharma. One is the slump in the price of oil, a blessing for India because the country imports 80% of its domestic oil consumption. Inflation has eased in response and interest rates have come down.

Customers have also been opting for more expensive, higher value ‘B’ vehicle segments at the expense of the smaller ‘A’ segment that has traditionally dominated India. B-segment vehicles have grown to account for 34.4% of sales compared to 8% at the turn of the century, while A-segment vehicles have declined from more than 60% to around 40%. The B segment is being driven in particularly by compact SUV sales, which have leapt from just 6,100 in 2012 to 378,400 for this year. Overall, while the market may be unlocking slowly there is a lot of potential for sales in a country where only 26 people out of a 1,000 own a light passenger vehicle (compared to 136/1,000 in China or 831/1,000 in the US).

Dealing with the deliveryThere is also progress in how this increased volume of vehicles is delivered, but all is not well with the transport infrastructure and equipment expected to support it – and the resulting inefficiency is leading to higher freight costs, according to Bharambe from Mahindra & Mahindra.

On the road network, which is the second largest in the world, national highways only make up 2% of routes but have to carry 40% of total traffic (and 65% of freight traffic), resulting in severe congestion. Road transport is 30% more expensive than in developed western countries because of inefficiencies caused by multiple factors including congestion, potholes, delays at checkpoints and toll stations, and underperforming equipment. However, India's road transport and highways ministry has launched an initiative to build 40km of new road a day, every day between this year and 2017. The National Highways Authority of India is targeting 8,000km in the fiscal year, with an additional 7,000km planned for upland areas by the Industrial Development Corporation.

Rail and waterways, meanwhile, are 70% more expensive to use than in more developed countries, noted Bharambe. Rail freight rates are some of the highest in the world because Indian Railways subsidises passenger tariffs at the expense of freight. The rail network, which is the third largest in the world, is over saturated and there is a low level of throughput, long and irregular transit times and poor terminal quality.

However, there is now some momentum behind efforts to improve the use of rail for automotive freight, including for finished vehicles. Thanks to a new rail policy several years ago, India now has more updated designs for rail wagons with much higher capacity than the existing modified passenger carriages (NMG) mostly used by Indian Railways to move vehicles. So far, India has around nine ‘rakes’ of such equipment available for vehicles in the country; six are operated by APL Vascor Logistics, and three by Maruti Suzuki.

Upendra Chandra Joshi, executive director of freight marketing at the Railway Board of Indian Railways, admitted that the government-owned railways needed more private investment in such fleets to increase capacity for moving vehicles. Currently, the railway is investing in another five NMG modified wagons, which he admitted was not particularly efficient.

“These rakes are not popular, but there was still demand,” he said. “We would still encourage OEMs and LSPs to procure the new, special types of wagons. We can take care of infrastructure, but for rolling stock we don’t have much capacity. We are looking for collaboration from industry.”

There has also been interest in increasing multimodal transport by water, including a number of trials in coastal shipping over the past year, although it has yet to take off significantly because of inadequate infrastructure and what was an unfavourable tax regime. However, as reported in September, India’s major ports are to introduce a discount of 80% for two years on vessel-related charges for coastal vehicle movements in an attempt to boost automotive sector demand for coastal transport. This followed a move in June when the Indian port of Mumbai reduced vessel-related charges for ro-ro traffic by around 10%, again in an effort to encourage the coastal movement of vehicles.

For the first time in modern history, the Indian government is also keen to see freight moving more on the country’s rivers and inland waterways.

Shrikant Mahiyaria, member (traffic) at the Inland Waterways Authority of India (IWAI), part of the Ministry of Shipping, told delegates at this year's conference that on top of the five national waterways the government has marked out for freight transport, another 106 have been identified for development. Inland waterways are only useful if they have intermodal terminal links and there are currently three major terminals being built to connect road and rail, with several smaller terminals planned as well.

IWAI is also developing a dedicated shallow raft vessel for use on the waterways, something needed because of the heavy silt deposits typical of the rivers in India

“The way forward is to make the rivers navigable, to undertake infrastructure development including terminals, and to make vessels available for bulk movements and the automotive industry,” said Shikrant.

The longer transit times that are currently typical of movement on India's rivers are set to come down within the next few years, with improved navigation and better lock technology, he added.

Mixed picture for GSTOne of the major developments that could impact on domestic logistics cost and make it is easier for manufacturers to move freight across states in the country is India’s Goods and Services Tax (GST), the biggest tax reform there for the last 60 years. India has been talking about its introduction for the last ten years but it was not until August that the lower house of the Indian parliament approved the bill and it is now expected to come into effect in April next year.

The GST is an indirect tax that will be imposed on all goods and services either produced in or imported into India, and will replace India’s archaic tax structure under which states and central governments impose taxes separately. Since the announcement of its introduction, the industry has been discussing how it could turn India’s economy into more of a ‘single market’. The price of a particular model should become uniform across all states in the new system, for example, which is a win for manufacturers, dealers and customers. However, while it opened up a plethora of opportunities for vehicle and parts moves, and promised to make India a single unified market, according to IHS' Sharma, the enthusiasm could be misplaced, at least when it comes to car sales.

That is because passenger vehicles are likely to be taxed at 28%, though more details have yet to be revealed. Nevertheless, that rate could dash industry hopes of making vehicles affordable and exploiting the potential for higher car sales unless it is applied evenly across the segments. Smaller cars have until now been subject to what Sharma called “preferential tax treatment” but this will disappear under the GST when it comes in next year.

However, while the tax rate might dash hopes that the price of Indian vehicles would come tumbling down, Sharma said it would still amount to less tax when it replaced India’s current excise tax of 12%, as well as a host of local state taxes and levies. Plus, major benefits are expected for simplifying flows for logistics, including allowing for more ‘hub-and-spoke’ distribution for production parts, finished vehicles and service parts.

However, Sharma warned that some of these benefits could be eroded if too many exceptions and variations were applied to GST, including allowing some states to levy other fees, as well as by applying different rates across vehicle segments.