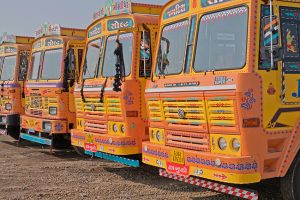 Following the rollout of the long-awaited Goods and Services Tax (GST) six months ago, automotive carriers in India are struggling to resolve different customer requirements about how the tax is actually applied to their services.

Under the GST, car hauliers can use either a Forward Credit Mechanism (FCM) or a Reverse Credit Mechanism (RCM). Under the FCM, transporters register to become fully GST-compliant and pay a forward or direct charge on the service provided (e.g. the transport of vehicles). This scheme allows them to benefit from an input tax credit on the investments they have made to provide their services (such as in equipment or driver wages). Under the RCM scheme, no GST registration is required but transporters pay 5% tax and receive no input tax credit.

Vipul Nanda, president of India’s Car Carrier Association – which represents the majority of finished vehicle carriers in India – said there was no consensus among OEMs on which route they wanted carriers to take.

"This has left [the sector] in a dilemma,” said Nanda. “One OEM wants our members to take the FCM route and the rest of them, for whatever reasons, prefer the other route of RCM. The vehicle, being the same whether it is used for the FCM-favouring OEM or RCM-favouring OEMs, [is divided in terms of use] for tax purposes, which becomes an accounting nightmare."

Finished vehicle carriers are ready to adopt any system, provided it is uniform across the OEMs, said Nanda. “We cannot engage in a business relationship with one OEM on the FCM mode and with others on the RCM mode,” he stated.

Nanda suggested that the logistics committee of automotive OEM lobbying group the Society for Indian Automobile Manufacturers (SIAM) needed to form a consensus on the issue.

After the GST rollout, India’s OEMs all initially favoured the RCM model, which is simpler to adopt and allows a move to FCM relatively straightforwardly – where moving from FCM to RCM is impossible. Many car hauliers, meanwhile, have also started out with RCM but plan to switch to FCM when appropriate.

One reason for this is the potential inclusion of fuel in the GST regime. At the moment, fuel is not included under GST and it is left to various states to fix the tax rates on it. Bringing fuel, which constitutes almost 50% of carriers’ operational costs, into GST would effectively make it cheaper for hauliers. Indian states, who derive hefty revenues from fuel tax, however, are reluctant to support such a change.

SIAM has not currently come to any decisions on what GST model carmakers would like their respective carriers to adopt, but is under increasing pressure to do so before the new financial year begins in April.