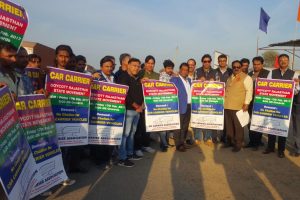 Car carriers in India are currently staging a protest on the borders of Rajasthan following the local government’s decision to impose a border tariff (or challan) of 5,000 rupees ($75) for equipment travelling through the state.

The amount now being asked is a significant hike on the previous fee of 1,500 rupees and is being imposed on equipment whether or not it complies with the new Central Motor Vehicle Rules (CMVR) regulation on car transporter lengths, which was introduced in October last year and supported by the Car Carrier Association (CCA) based in India.

The CMRV law establishes a legally enforceable maximum length for trailers of 18.75 metres. It also requires enclosed trailers to be fitted with a sliding inspection window and for speed limiters to be fitted, restricting them to a maximum of 60kph (37mph), as well as for the use of rear-facing camera systems.

Despite all that the government in Rajasthan said it had increased the fee on all carriers as a deterrent to stop them using roads in the state on safety grounds because without them there would be fewer accidents, according to the Times of India.

However, Rajasthan lies on the main north-south freight corridor between New Delhi and Chennai, and up to 13,000 carriers move through the state.

The main alternative route to passage through Rajasthan runs through the state of Uttar Pradesh, regarded as one of the most corrupt with regard to levying fees from car carriers.

Additionally, this is not the first time that Rajasthan has imposed penalties on car carriers. In August last year, state officials started imposing penalties of 5,000 rupees on carriers that did not conform to the incoming CMVR law despite the fact it is not enforceable until the end of March this year.

The CCA has responded to the imposition of the latest fee hike with a letter to the Indian government calling for an immediate end to it, following pleas to the local government apparently falling on deaf ears.

“We have had several meetings with the senior officials of the transport department of the Rajasthan government but their only answer is that they want revenue,” said the CCA’s president, Vipul Nanda, in the letter.

“To stop our costs from further increasing we will have to stop this otherwise other states will all start following this example,” continued Nanda.

Car carriers in India regularly pay high tariffs for transit through states and there are widespread accounts of unofficial sums being demanded of car carriers for onward movements through certain states. These same car carriers are having to invest in new equipment to meet the CMVR regulations by the end of next month, though they have recently scored a victory in being able to charge higher rates to customers for the use of the new equipment.

However, faced with the increased border tariff in Rajasthan, car carriers have now taken industrial action and are parking up along the border of Rajasthan in protest.

“We in [the] CCA have decided to park our trailers and pay no challans at all [at] the Rajasthan border from 17th February 2017 indefinitely, till the time that this issue is resolved,” stated Nanda in the letter to the central government.