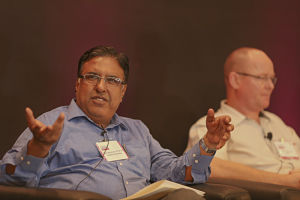 Flows of goods across India’s state borders seem to be smoothing out slowly as toll barriers are removed, following implementation of the nationwide Goods and Services Tax (GST) several months ago.

Speakers at this year’s Automotive Logistics India Summit last week gave examples of how the new federal taxation system, which took over a decade to bring to fruition, was already showing positive signs for the logistics industry.

Amit Bhardwaj, senior research officer (transport) at the National Institution for Transforming India (NITI Aayog), a government sponsored think-tank, said the issue of implementing the new tax system was basically at state level, where existing local border check posts had to be removed.

“This is something that was very close to the state revenues’ [agencies’] hearts, so they don’t want to do away with it immediately. Slowly, slowly, we are pushing them to remove them. Some states are done and in some it is still going on,” said Bhardwaj. “By December we will see the major states removing these.”

The GST has rationalised state and central indirect taxes, creating a unified market. This should help allow seamless movement of goods across states – an especially important goal for the automotive logistics industry that will hopefully reduce business costs.

Anand Venkateswaran, senior general manager, sales logistics at Hyundai in India, told delegates at the summit that while it was still early days, there was anecdotal evidence of improvement, thanks to GST.

“We have been hearing that the truckers have been able to move much faster, and we have seen it translate into a quantifiable reduction in transit times,” he said.

As an example, said Venkateswaran, typical transit times on the Chennai to Delhi route had gone down to around 6.7 days, from 8 days previously.

He gave an example of a border where there were already signs of major improvements. "During my visits before the implementation of GST, I saw 500-600 trucks [lined up]. During my last two visits at the end of August and in September, I did not find any trucks,” said Ramakrishnan.

Even prior to the implementation of GST, the country had improved its ranking in the World Bank’s Logistics Performance Index from 54th in 2014 to 34th in 2016. Among the sub-categories, infrastructure and customs have improved massively; while Bhardwaj said there was a need to further improve logistics costs and timeliness.

Seamless inter-state access is seen as key to speeding up the movement of goods in the country, according to Bhardwaj.

Delays average as much as 4.3 hours at some inter-state borders, said Bhardwaj, who pointed out other government initiatives such as standardised documentation, electronic tolling and integrated checkpoints as further ways to speed things up.

In its recent IPO document, Mahindra Logistics, a major automotive logistics service provider in the country, indicated it, too, was positive about the implementation of GST.

“We expect the GST regime to benefit the inter-state movement of goods which may lead to opportunities for growth of our business as we expect companies across several industries in India to make their storage and transportation decisions on the basis of logistical efficiencies instead of their tax efficiency and restructure and optimize their storage, logistics and supply chain systems,” said the company in the IPO prospectus.

“As a unified taxation system, it has essentially led to the removal of most of the state taxes (though not all) as of now, which has led to a good amount of cost reduction,” he said. “In the next two to three months we do expect an increase in business volumes as a result of the smoother movement of goods in transit, resulting in faster turnaround times of commercial vehicles.”