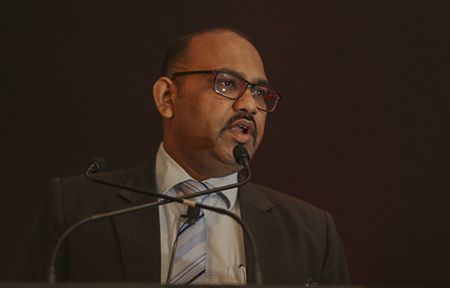 Vehicle exports’ share of total production in India is set to decline in coming years as carmakers use their manufacturing capacity to meet local market demand, which is forecast to continue growing at a healthy rate.

Puneet Gupta (pictured), associate director for vehicle sales forecast for South Asia at research firm IHS Markit, predicted at last week’s Automotive Logistics India summit that the proportion of vehicles built in India for export could roughly halve over the next 5-7 years.

“There are many OEMs that are pretty strong on exports rather than domestic sales, but what we will see is that from 2023 or 2024, the exports are actually going to come down in India," said Gupta.

Gupta suggested that a forecast increase in excess vehicle production capacity globally meant there would be less need for India as a global production hub. At the same time, the Indian domestic market is predicted to grow strongly.

About 3.7m light vehicles were produced in India during 2016, according to data from the International Organisation for Motor Vehicle Manufacturers (OICA), and IHS Markit expects production to continue to grow at a healthy 8% annually between 2017 and 2024, which means local production could exceed 6.4m cars.

In volume terms, Indian vehicle exports are predicted to remain relatively stagnant at around 700,000 vehicles per year.

Speaking at the summit held last week in Chennai, Gupta highlighted the country's already impressive growth rate in sales over the past 10 years, with 3.4m light vehicles sold in 2016 – double the number of a decade ago.

By 2020, the Indian market is expected to be the third biggest in the world, though it did not even feature in the top 10 in 2007.

American producers are expected to be less affected. Ford, which has grown to become one of India’s top vehicle exporters, shipped more than 60% of its production outside India in 2016 and IHS Markit expects it will still send more than half of its production for export in 2024.

Earlier this year, meanwhile, General Motors announced that it would be moving to an export-only production model in India, as it ends domestic sales in the country.

India’s largest carmakers, Maruti Suzuki and Hyundai respectively, are set to see their current export shares grow, however – from 11% of production to 17% for the former and from 21% to 28% for the latter.