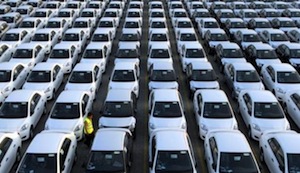 Indonesia must overhaul a number of regulations including its sales tax regime to stimulate domestic vehicle manufacturing and allow it to challenge Thailand as the preferred choice for OEMs operating in the ASEAN region, the Association of Indonesian Automotive Manufacturers (Gaikindo), has warned.

Yohannes Nangoi, new head of Gaikindo, said the country’s vehicle handling ports were in particular need of attention, both to improve car exports – which have fallen by almost 34% in the first two months of the year compared to January and February last year – and attract investors. Their poor quality and long dwell times were the main factors discouraging investment in Indonesia’s automobile industry, he added.

A recent study by Ipsos Business Consulting, however, has suggested Indonesia would still eventually replace Thailand as the main automotive production hub in the ASEAN region.

“The evidence is clear that in terms of the trend in vehicle production output, policy development and improvements in infrastructure, the Republic [of Indonesia] continues towards increasing capacity, domestic consumption and export volumes,” said Markus Scherer, global automotive sector leader at Ipsos. “Automotive manufacturers and policy makers in Indonesia, Thailand and elsewhere will want to consider the implications.”

Closing the gapAccording to Gaikindo, Indonesia exports around 200,000 vehicles a year and Ipsos puts its exports at around 23% of total production. The fall in the first two months of the year left exports during that period at around 22,250 cars, compared to 33,550 over the same period last year. By contrast, Thailand exported 1.2m vehicles last year out of a total annual production volume of 2m – or 60%.

While the production gap between the two countries was around 810,000 last year, Ipsos’s latest report, Indonesia Automotive Outlook 2020, predicts this will close to 465,000 over the next four years.

For this to happen, the Indonesian automotive sector needs to increase plant utilisation, however. Installed production capacity across the country is close to 2m vehicles but last year it was only using 62% of that capacity, according to Ipsos. It also needs to make further investment of $2.6 billion in the creation of new or expanded plant capacity, said the analyst.

“Global automotive players who do not yet have a significant production base in Indonesia will increasingly be asking whether they are positioned to gain market share in an ASEAN market comprising more than 600m people, and whether they can defend their existing market share as other companies look to expand in Indonesia and Asia generally,” said Douglas Cassidy, Indonesia country head at Ipsos Business Consulting. “A production base in Indonesia will enable them to benefit from the cost, scale and supply chain advantages of the country, which seems on track to become the pre-eminent automotive power in ASEAN.”

Regulatory reformGaikindo, however, has stressed the need for regulatory reform if Indonesia is to attract and retain the carmakers it needs to fulfil this potential. In particular, it said the Indonesian government needed to revise the 30% sales tax it currently imposed on sedans and SUVs, along with the 10% sales tax on MPVs.

The association’s co-chairman, Jongkie Sugiarto, said lowering these taxes would improve sales, which in turn would encourage manufacturers to produce cars in the country for both domestic and overseas markets.

Ipsos has backed this up to some extent, with Chukiat Wongtaveerat, senior consulting manager at Ipsos Bangkok, suggesting stable regulation and continuous development of infrastructure would help to support the automotive sector.

“Once this happens, we are likely to see a ‘domino effect’, with other absent OEMs looking to build a plant and engage in aggressive expansion of their dealer networks,” said Wongtaveerat.

Ipsos has also pointed out that, according to the World Bank’s ‘ease of doing business’ index, Indonesia ranks 109 out of 198 countries, while Thailand ranks 49.The Indonesian government is aiming to improve the country’s ranking to 40 by 2018 but to do that the country’s policymakers will need to focus on improving infrastructure and capacity utilisation as well as making logistics less complicated.

Gaikindo’s call and the Ipsos report both follow an earlier statement by the Indonesian government’s minister for industry, Saleh Husin, encouraging carmakers to set up production in the country.

Husin’s statement was made in response to the closure earlier this year of Ford’s business in Indonesia – PT Ford Motor Indonesia (FMI). FMI is a company that distributes Ford brands in Indonesia, importing entire products (CBU) from Thailand and the Philippines.

“Ford is losing its grip against competitors that have developed component manufacturing bases in Indonesia,” said the minister.

Ford sees the situation a bit differently. “After pursuing every possible option, it became clear that there was no reasonable path to achieve sales growth or sustained profitability for Indonesia," Ford's spokesperson for the ASEAN region, Neal McCarthy told Automotive Logistics. "It was difficult for us to compete without local manufacturing and vehicles to sell in key market segments. We restructured our business there, but still had less than 1% market share.”

Ford’s withdrawal followed a similar move by GM last year when it closed its Bekasi plant in Indonesia citing high material costs, logistics complexity and limitations on its ability to fully utilise the local supplier base.