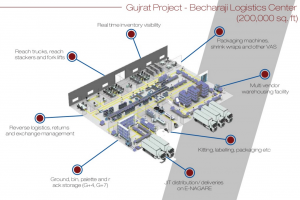 Indian integrated logistics provider IRC Group has revealed details of its new Becharaji logistics centre, in the state of Gujarat, which is feeding inbound parts to the new Suzuki plant 10km away in Hansalpur that opened in February this year.

IRC Group has invested more than 30 crore ($4.7m) in the logistics facility.

Aradhya Gupta, director of IRC, said his company was providing primary transport to its logistics warehouse from suppliers across the country, as well as handling some parts imports from overseas. The facility is located near the port of Mundra. IRC is also managing inventory, with an average holding time of two days, and making just-in-time (JIT) deliveries to the Suzuki plant.

“IRC Group provides an end-to-end solution to the customers, reducing frictional losses in the customer's supply chain and logistics that arise as a result of the goods being handled by multiple LSPs,” Gupta told Automotive Logistics. “The mindset here is that Maruti Suzuki and its component vendors should not feel the need to have their people follow up for the location/status of their goods.

“It is something that only a handful of people are doing in India as of now,” added Gupta.

The car plant it is serving has been set up in the name of Suzuki Motor Gujarat (SMG), a wholly owned subsidiary of Suzuki Motor, with an investment of 60 billion yen ($547m). It makes the Baleno model, previously made at the Maruti Suzuki joint venture plant in Gurgaon.

Vehicles produced at the Gujarat Plant will be supplied to Maruti Suzuki for domestic and export sales. It has an annual capacity of 250,000 units and production will be gradually increased to that level. It is Suzuki’s first wholly-owned plant in India. The carmaker said it was adding an engine and transmission plant by the beginning of 2019 worth 100 billion yen.

In terms of JIT deliveries to the Suzuki plant, Gupta said, IRC’s inventory management system is amalgamated with Suzuki’s E-Nagare ordering system. IRC receives an order slip that specifies the SKUs, number of units and time of delivery, from which it selects and delivers the material.

IRC already provides a number of other services for Suzuki, including ex-works distribution of spare parts to the east and north-east regions of India, and spare parts to Europe, Latin America and Africa. It also handles the import of components from Korea, Indonesia, Japan, China and Germany, and the export of finished vehicles to Nigeria and the Seychelles.

Benefits of GSTAsked about the impact of the new Goods and Services Tax (GST) system in India on its logistics services, Gupta said there was definitely a positive impact.

“As a unified taxation system, it has essentially led to the removal of most of the state taxes (though not all) as of now, which has led to a good amount of cost reduction,” he said. “In the next two to three months we do expect an increase in business volumes as a result of the smoother movement of goods in transit, resulting in faster turnaround times of the commercial vehicles.”

The GST is an indirect tax that is imposed on all goods and services either produced in or imported into India. The new system came into effect in July this year with expectations that it would be easier to store parts and finished vehicles in one state of the country and distribute them to another without paying extra taxes, making it easier to use distribution centres.

Gupta went on to say that from a warehousing perspective, IRC expected to see a massive change to the way logistics was managed over the next couple of years.

“The entire process will be managed by anyone who can provide a legitimate one-stop solution,” he said.

In July, Maruti Suzuki announced that the GST regime had brought down the ‘ex-showroom’ prices of its passenger vehicles by 3%, though the withdrawal of tax concessions on hybrid vehicles had actually increased the price on those models, including the Smart Hybrid Ciaz diesel and Smart Hybrid Ertiga diesel.