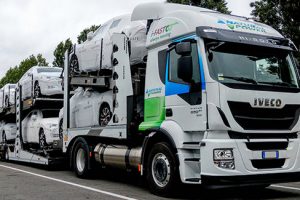 Truckmaker Iveco has supplied ten Stralis tractor units powered by liquefied natural gas (LNG) to i-Fast Automotive Logistics, the car carrier division of Fiat Chrysler Automobiles (FCA) based in Italy and operating across Europe. Neither company disclosed the value of the deal.

According to Iveco, it is the first delivery in Europe of LNG-powered car transporter units. Iveco, which calls the model the New Stralis Natural Power, said it was the first natural gas vehicle designed for long-haul work. It runs on a 400hp Iveco Cursor 9 engine with Eurotronic transmission and features two LNG tanks, each with a 540-litre capacity, to give a range of up to 1,500km. The vehicles also offer advantages for inner city deliveries.

“The clean fuel used on these vehicles means they can freely access urban areas where increasingly stringent noise and pollution restrictions are being introduced,” said the truckmaker in a statement.

Equipment maker Rolfo is supplying the trailers in the form of its Ego 427 model which it said met the needs of alternatively fuelled vehicles and the associated power supply to the trailers. The body is connected to the truck by a standard fifth wheel coupling.

Over the last few months, i-Fast has been testing Iveco’s C-LNG truck model, which is fitted with tanks for both LNG and gaseous natural gas (GNG), on a range of different routes in northern and central Italy. The choice to go with LNG-powered trucks makes i-Fast Automotive Logistics the first car carrier to offer transport on such equipment. It said the decision was also based on expected developments in the Italian distribution network, where LNG fuelling stations are forecast to grow from six to ten this year.

The introduction of a fleet of LNG-powered car carriers is a first but follows a number of initiatives where car carriers have used compressed natural gas (CNG). As reported earlier this year, FCA spent two years on a $40m project to convert 179 tractor units from diesel to CNG for the delivery of parts to assembly plants from suppliers in the US state of Michigan.

Honda and Toyota have also introduced measures to increase the use of CNG in the delivery of vehicles.